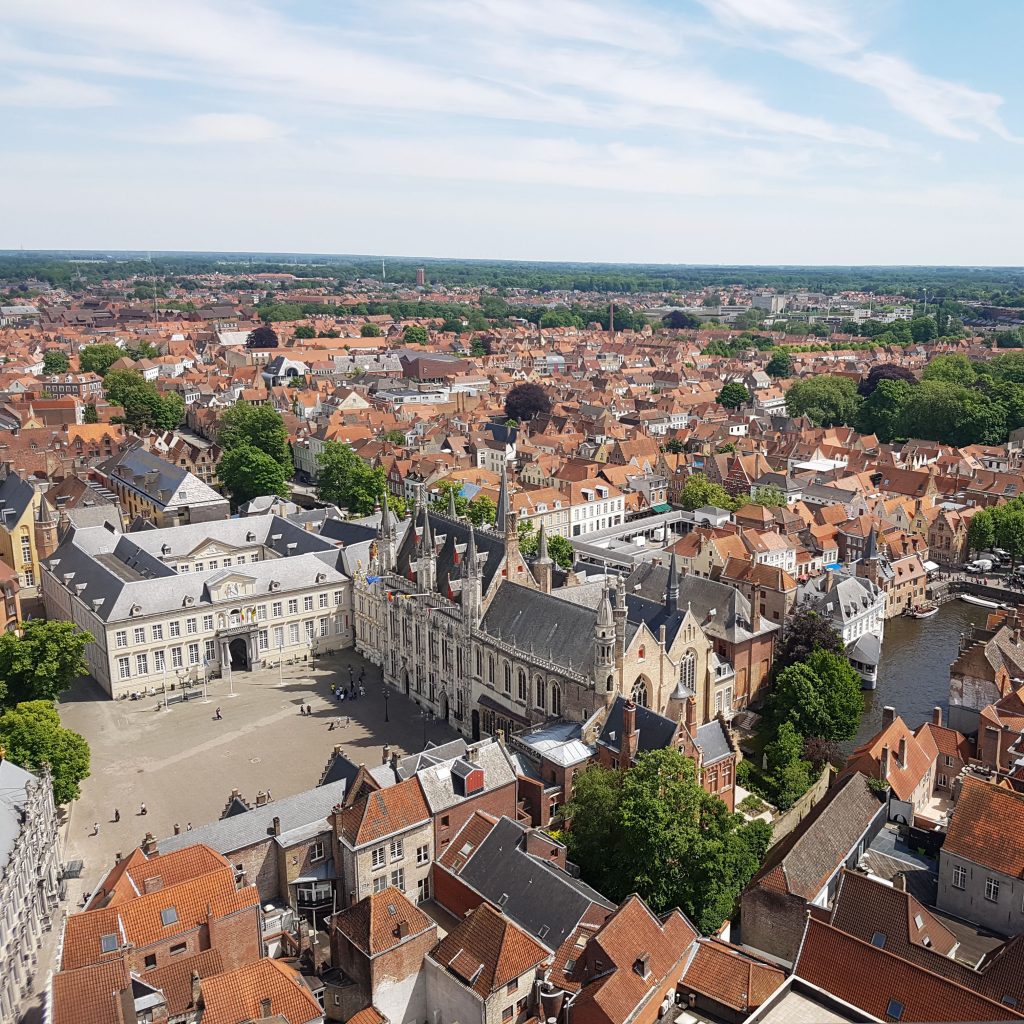 Ever since I went to Brussels a few years ago, I have wanted to visit Bruges. We all have such places on a list for future travels right? Being only three hours or so on a train from St Pancras, it is incredibly quick to get to. My mother has been to Bruges and gave it a glowing report. From photos, it looked like such a cute place to visit and not on the hectic scale of a big city such as Brussels. I was definitely sold on going one day.

So a few months ago I decided I was going to take a holiday to Bruges in May. I was going to travel solo, which I am completely comfortable with and wanted to give myself at least a day and a half to explore.

Package holidays with Eurostar are provided by Lastminute.com. I wasn’t too fused with where I stayed, as long as it was a hotel not too far from the train station. Many of my initial searches came back with standard b&b’s, however, one day a new option came up Floris Karos Hotel. The rooms looked spacious and homely and it was right at the cheaper end so I snapped it up. I stayed for two nights, which including my travel cost £208.83.

There wasn’t too much flexibility with train times, without having to pay more. This meant I was up mega early to catch a train at 08.45. Is it just me or is the departure area for Eurostar at St Pancras rather small? Totally feels like everyone is sitting outside a departure gate at an airport. Once you’re through security all you can really do is sit and wait for your train, that’s if you can get a seat.

I would get to Brussels around 11 local time. When we arrived the driver informed us of where to catch the next train to Bruges. This was really helpful. The connecting train was actually twenty minutes late! I’m sure I read somewhere on the Eurostar site that passengers could use their Eurostar ticket to sit in first class on the connecting train to Bruges. However when the ticket lady passed through the train nearly all of us in first class were kindly asked to move! A bit of a blessing in disguise because I ended up helping people get out of the toilet I was standing near to. The door was stiff and everyone was struggling to open it from the inside.

My hotel was only a fifteen-minute walk from the train station. Not too bad, but difficult when you are pulling luggage in very hot weather. Because I got to the hotel well before check in time I could leave my case and start to explore Bruges. I had a plan of things to see so I was all set.

The “room” I was actually given was quite simply the best one I have ever stayed in. When I opened the front door I was greeted with stairs to walk up. Then I had this….. 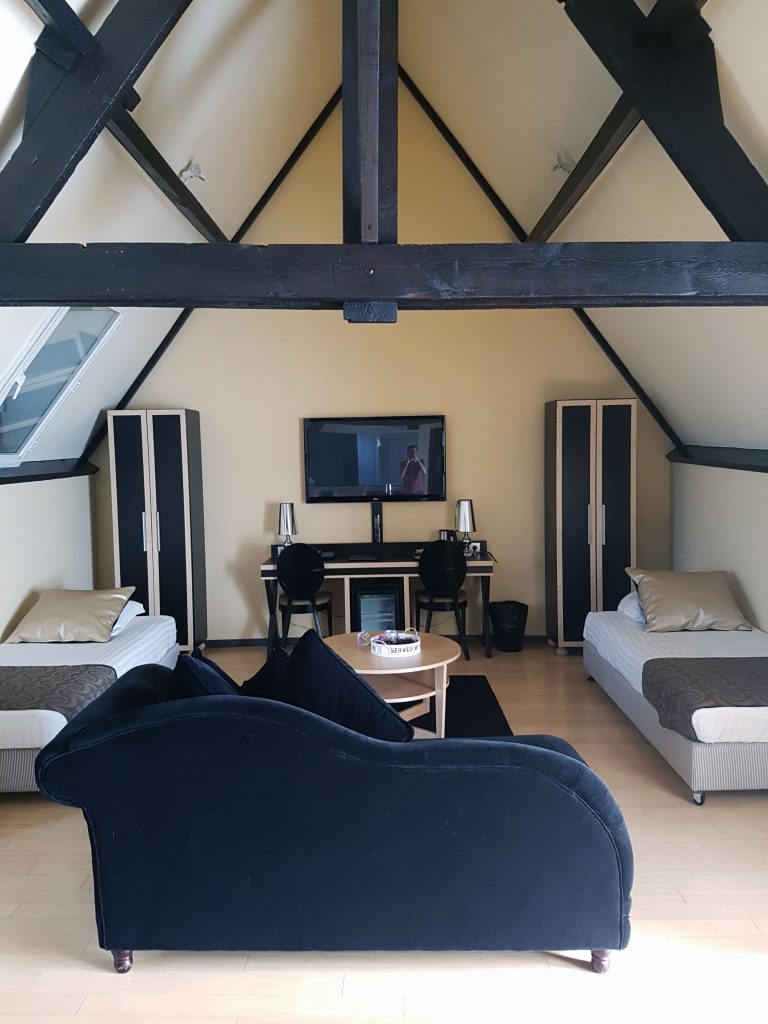 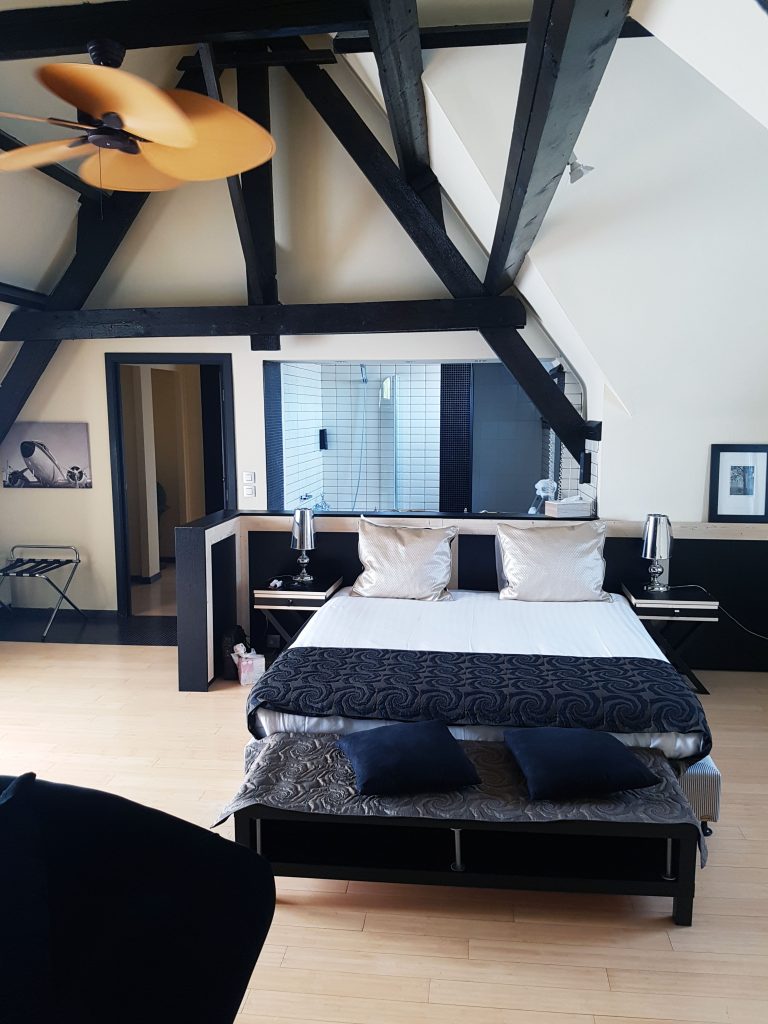 The only problem is the lack of a bathroom door. This would be an issue for more than one occupant.

The splendour of Markt Square is at the centre of Bruges. Its most striking site is undoubtedly the Belfry Tower. Unsurprisingly the square was used as a market since 985. Today it is populated my restaurants, but on a Wednesday a market still comes back to the square. 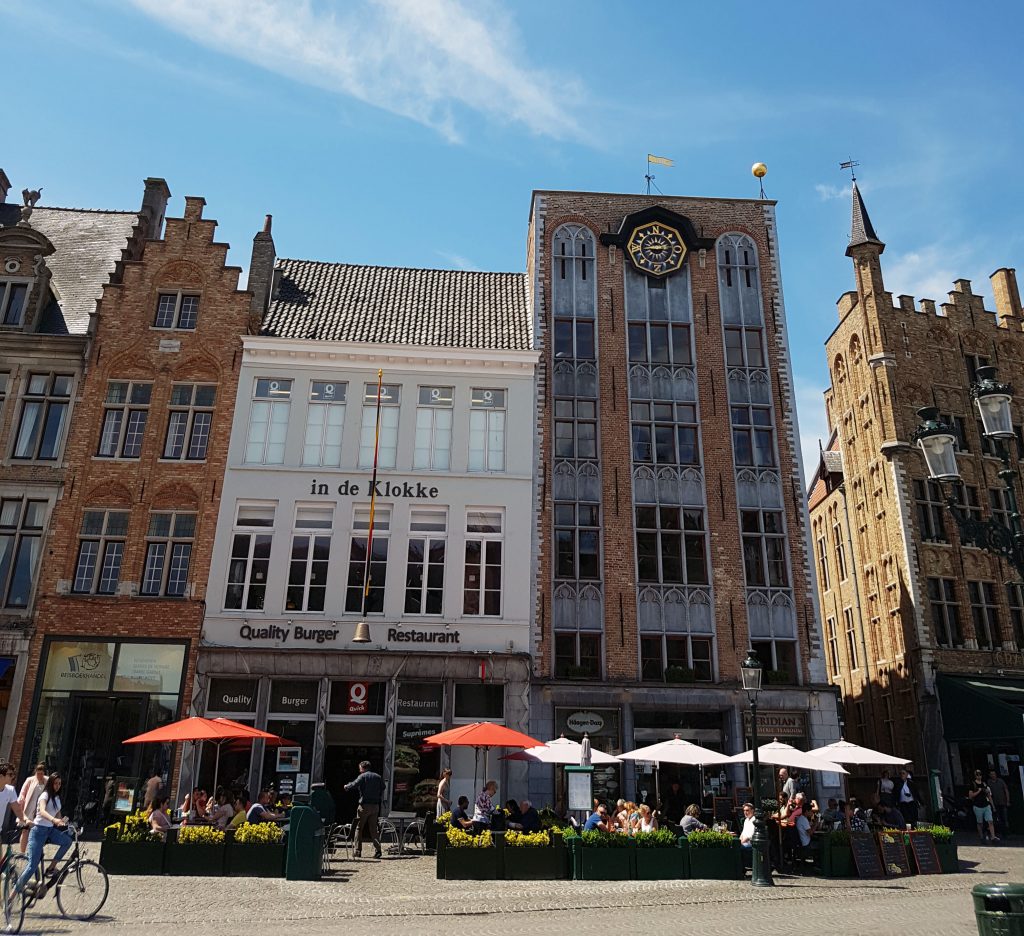 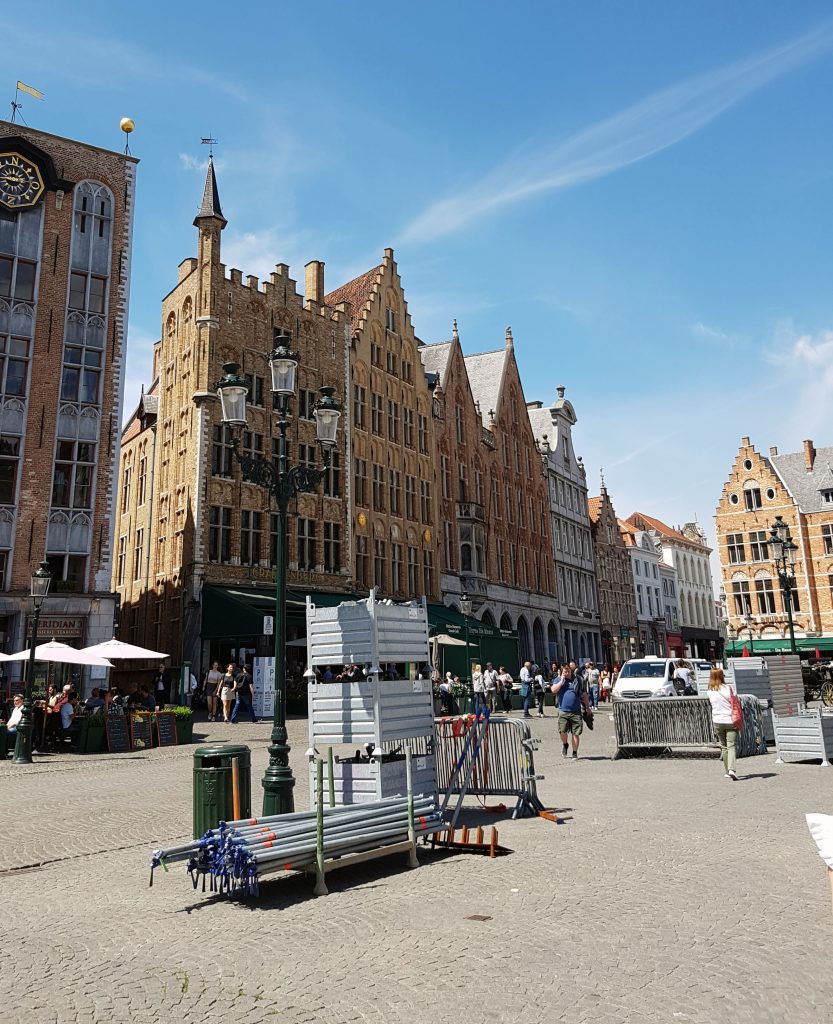 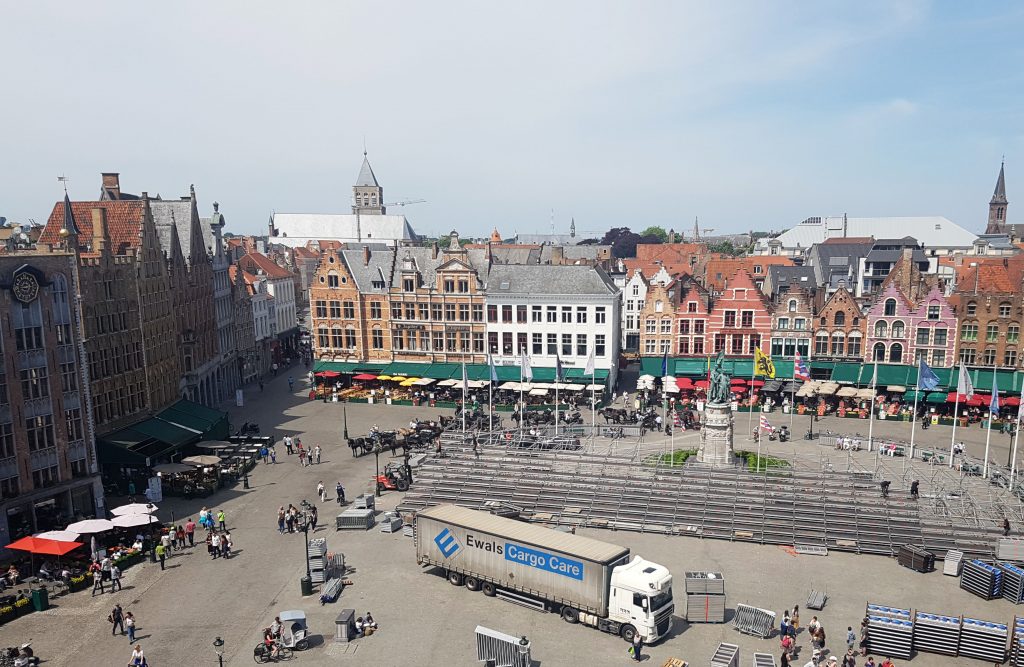 The tower is a wonderous site. The opportunity to walk up to the top is something I couldn’t miss. The number of steps was a challenge but what made it even more difficult was that the narrow staircase had a two-way system (people going and down the same staircase). The views of Bruges were incredible. 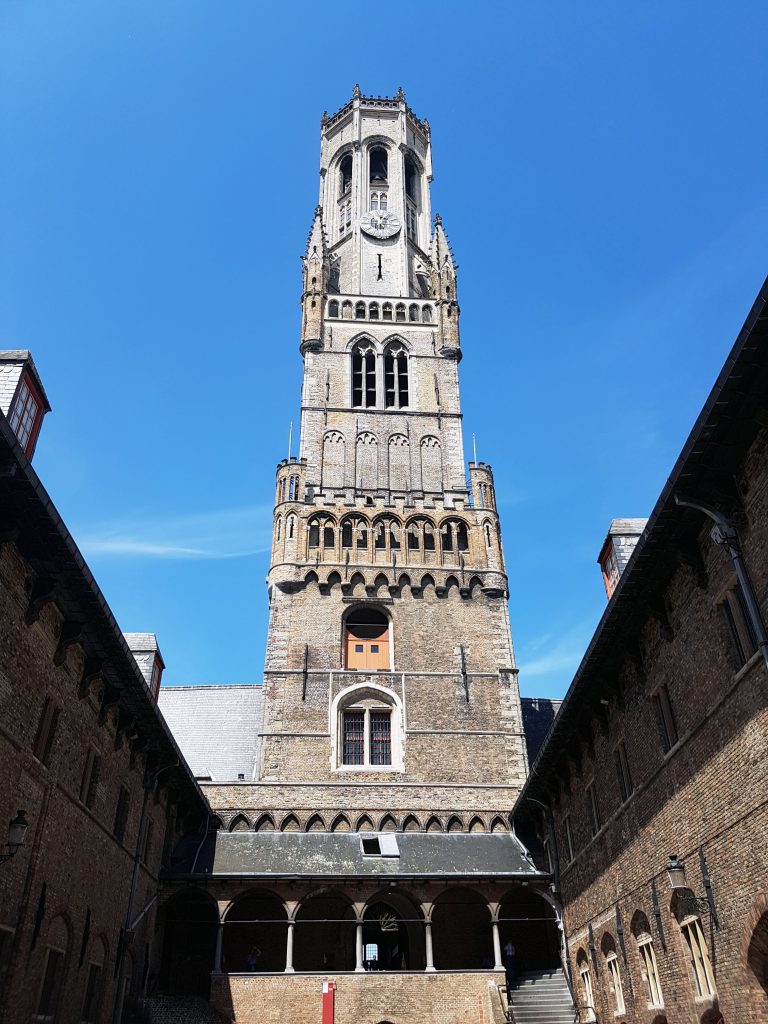 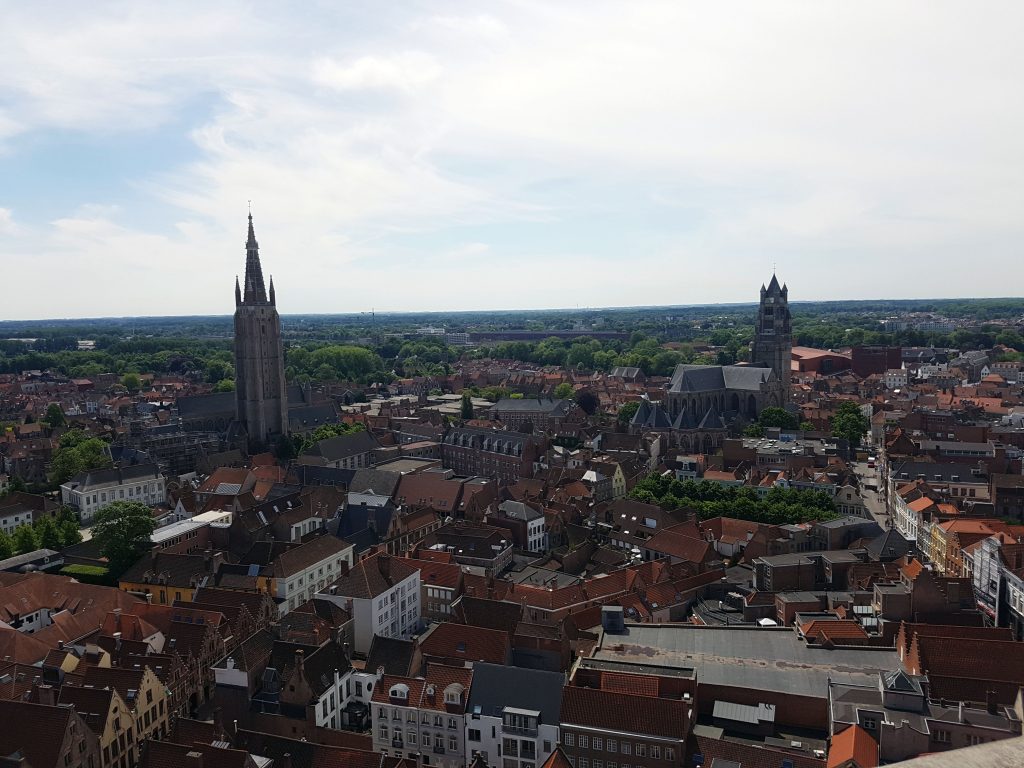 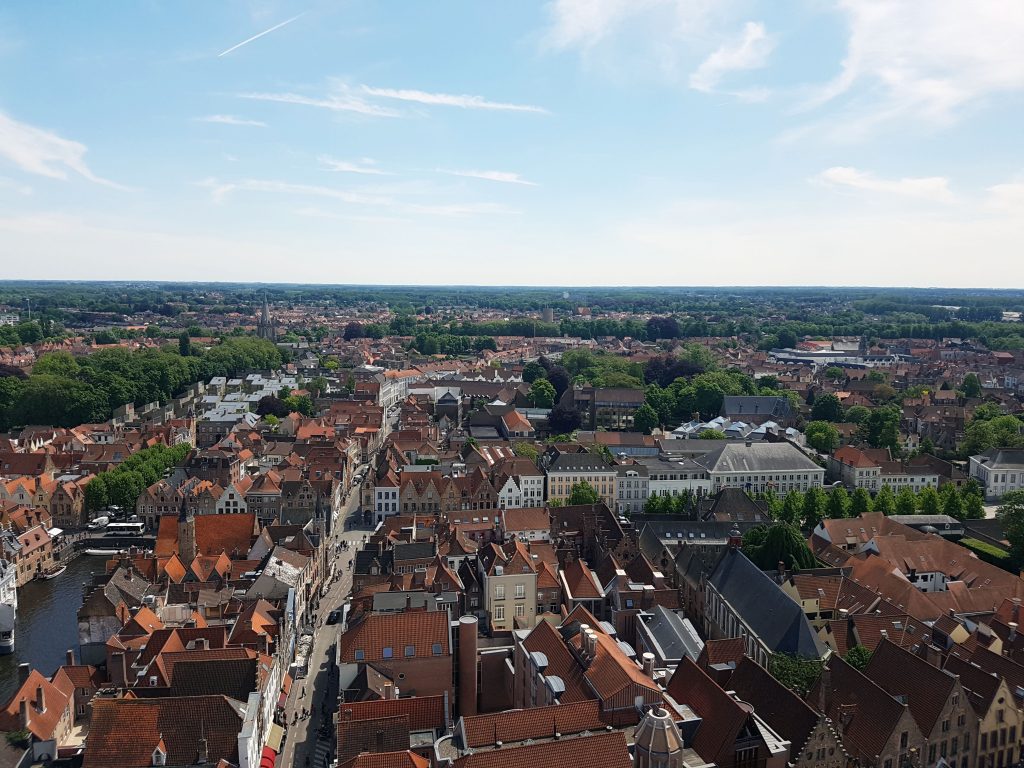 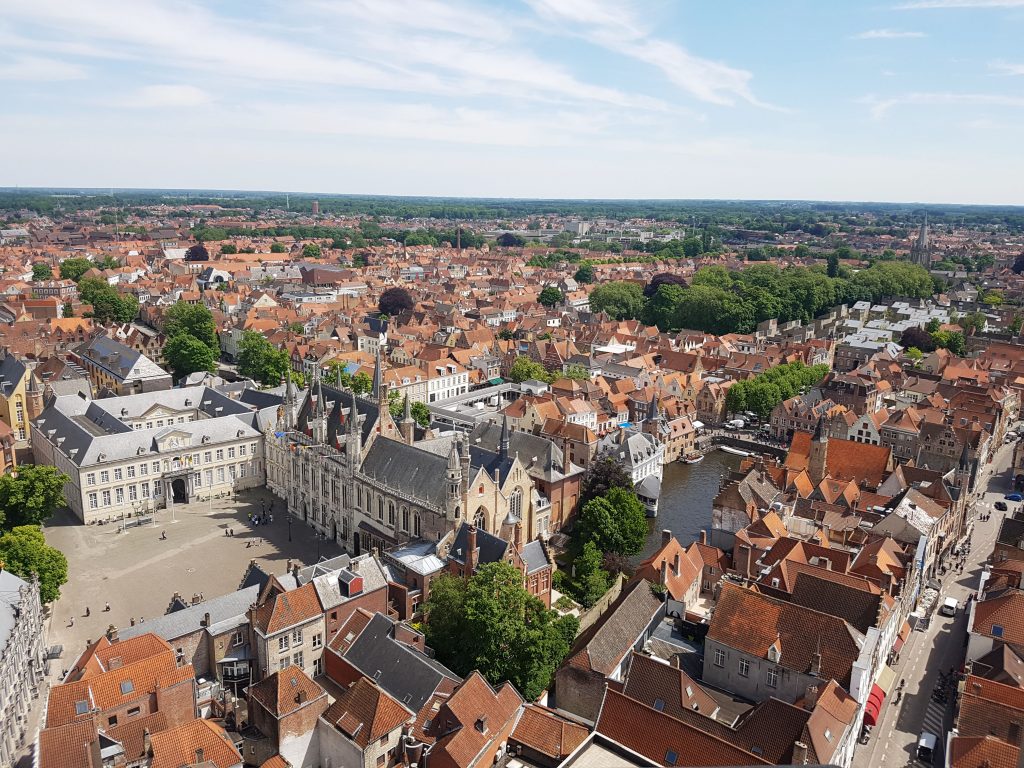 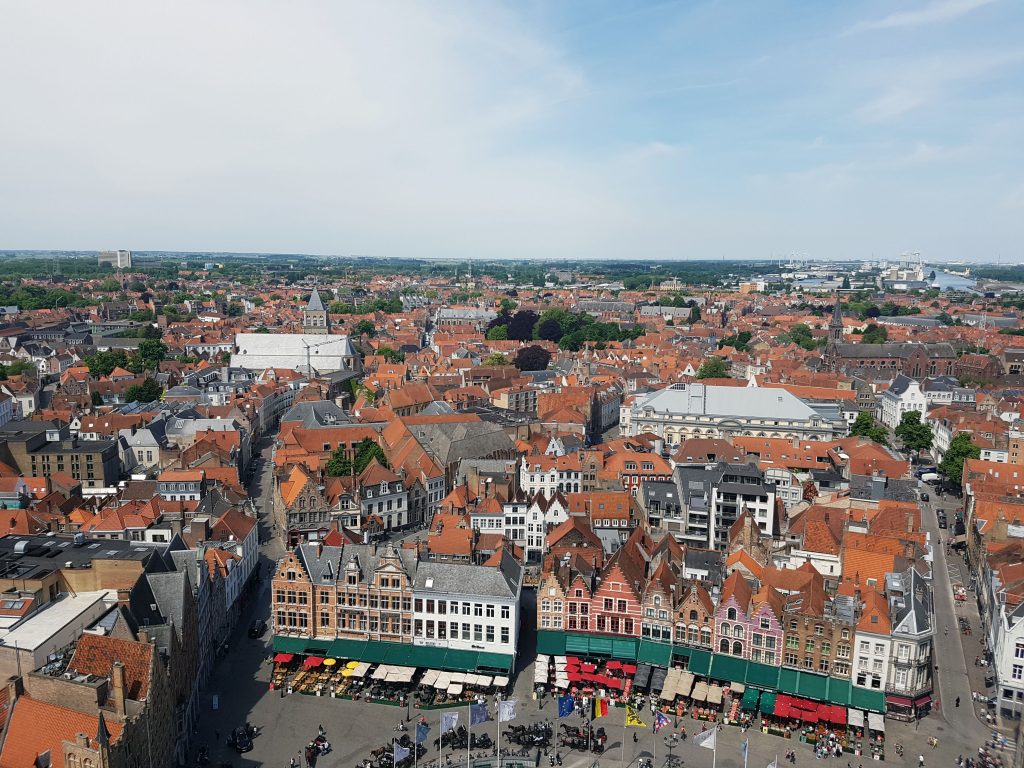 At the entrance to this museum is a moving figurine narrating what this museum is about. With your entry ticket, you receive a free audio guide that takes you through seven rooms. Outside of the tour upstairs is a balcony overlooking Markt Square. You will also find a beer balcony. 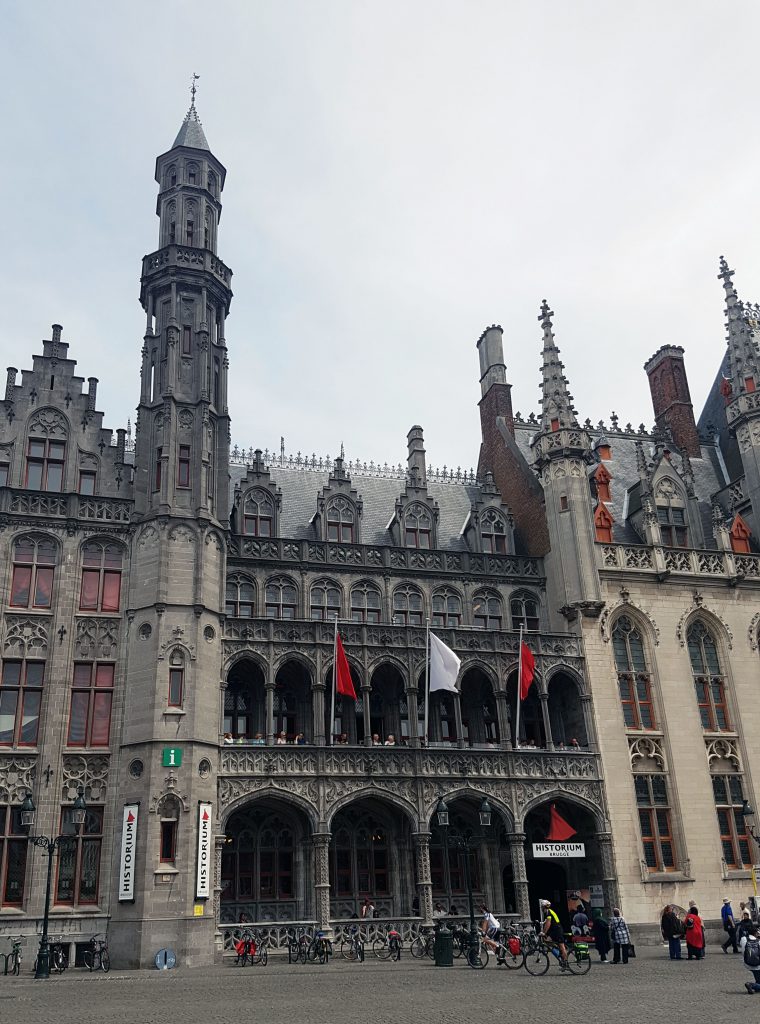 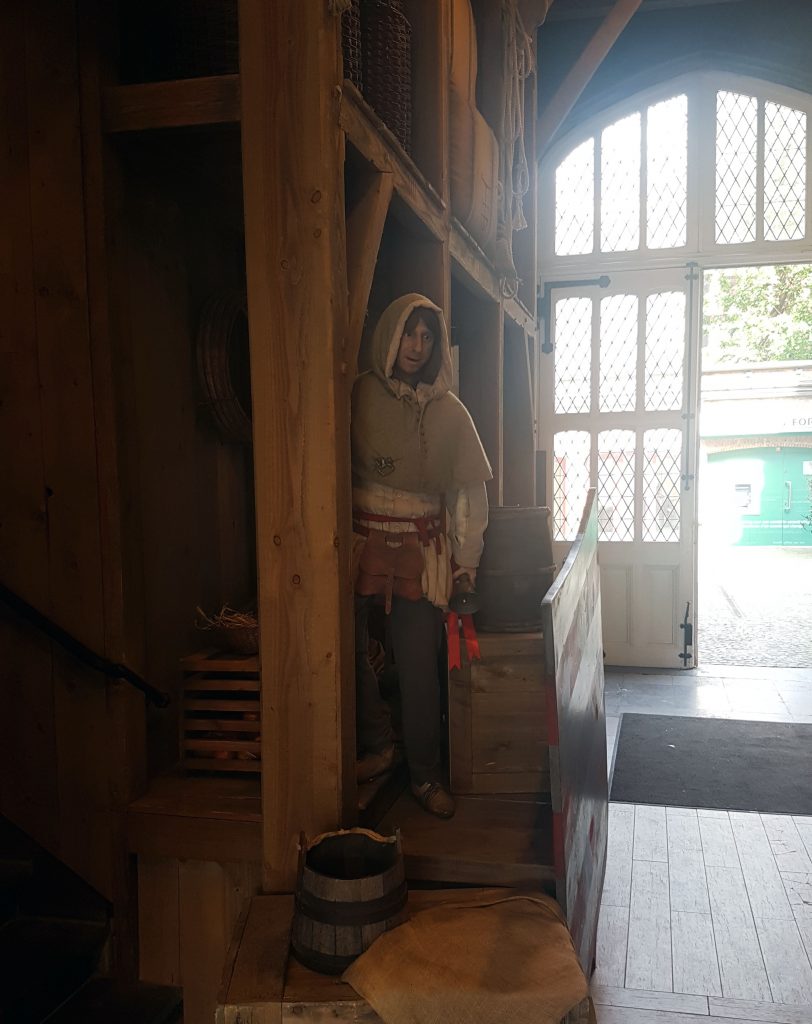 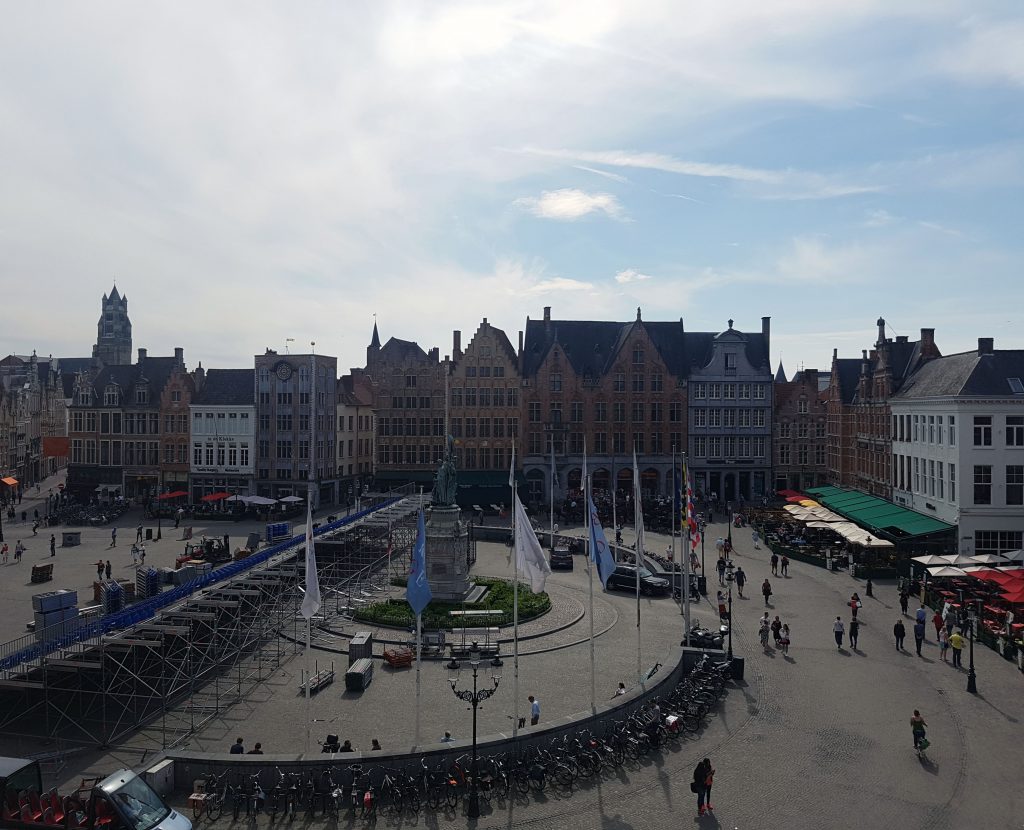 Very close to Markt Square is Burg Square. Here you will find City Hall and the Basilica of the Holy Blood. 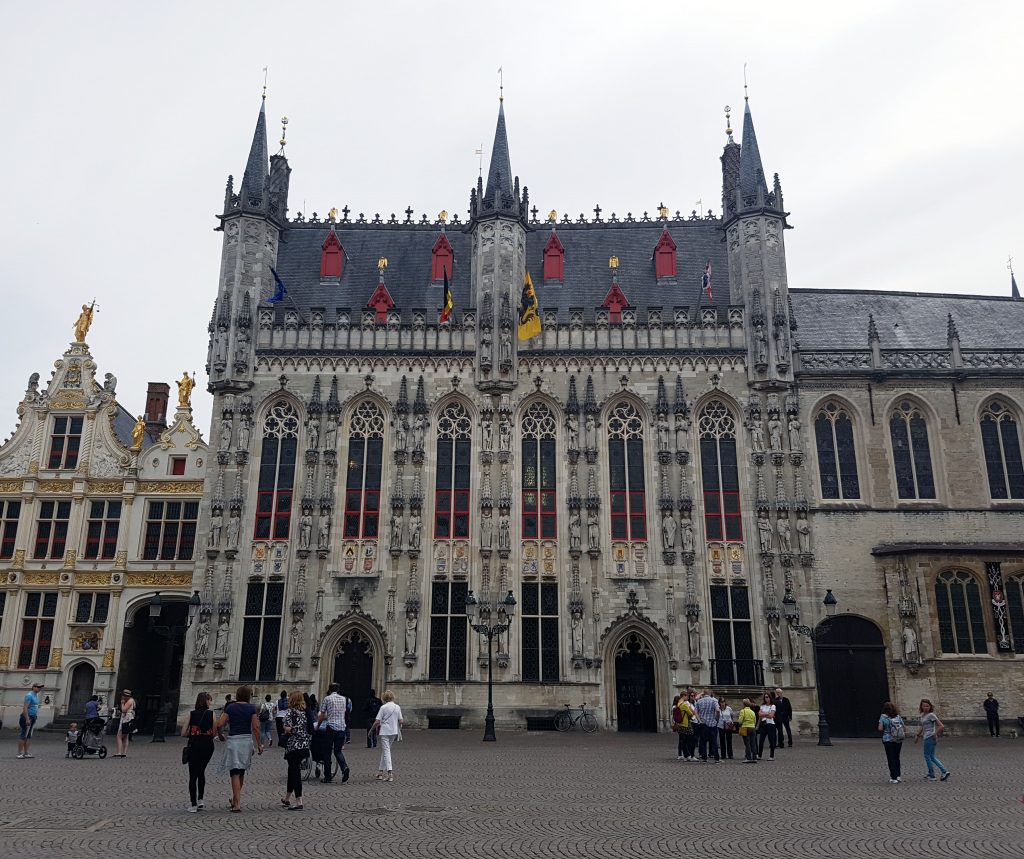 Basilica of the Holy Blood

Inside this small church is so much intimate detail. I just admired how beautiful it all was. To one side there was a small altar with a priest sitting in front of an object. People were queuing to stand in front of it and be blessed (or at least that’s what it looked like to me). 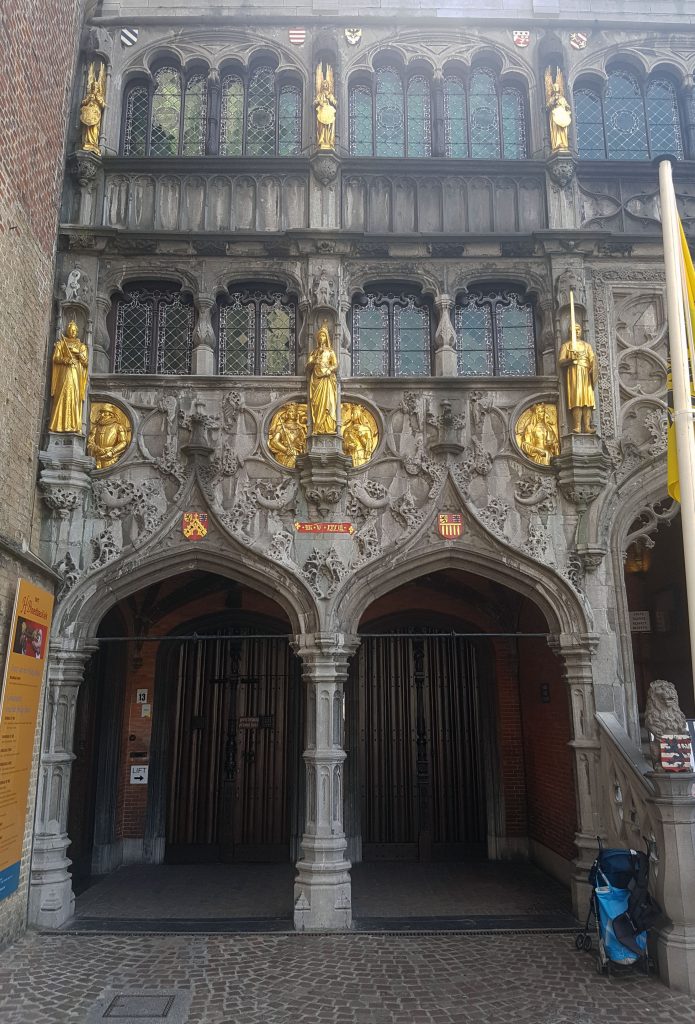 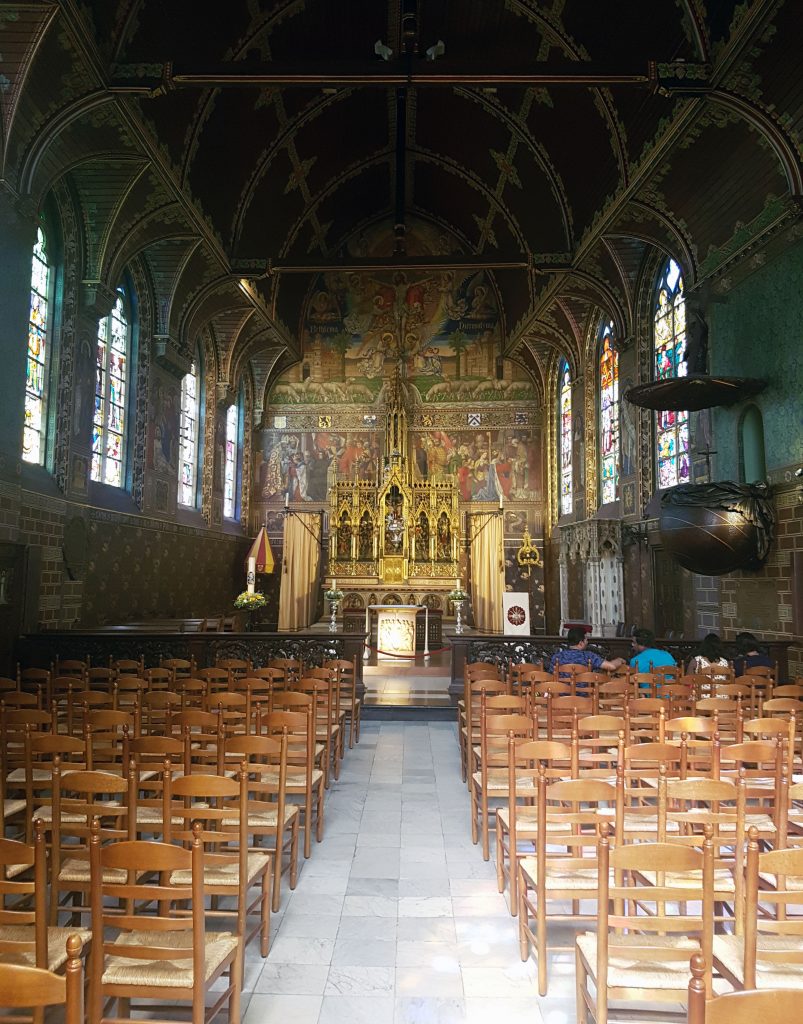 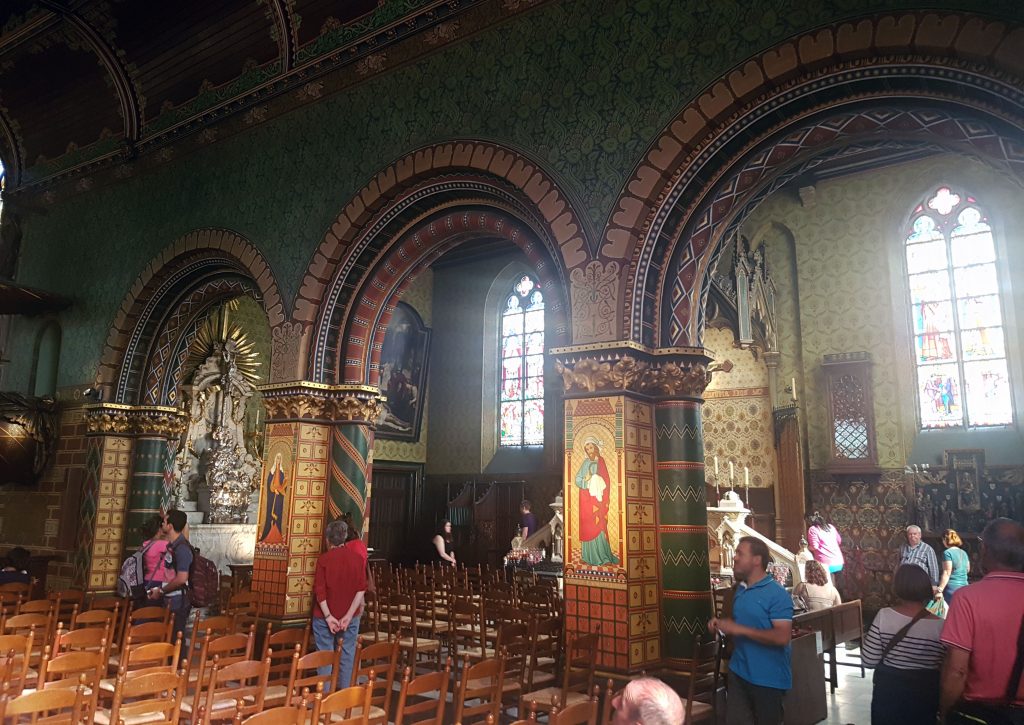 If you walked around town enough you will inevitably walk over a bridge and see a boat tour going along the canal. This is just something you have to do no question. It lasts about half an hour and gives you a different perspective of Bruges. Remember to duck your head over the low bridges! 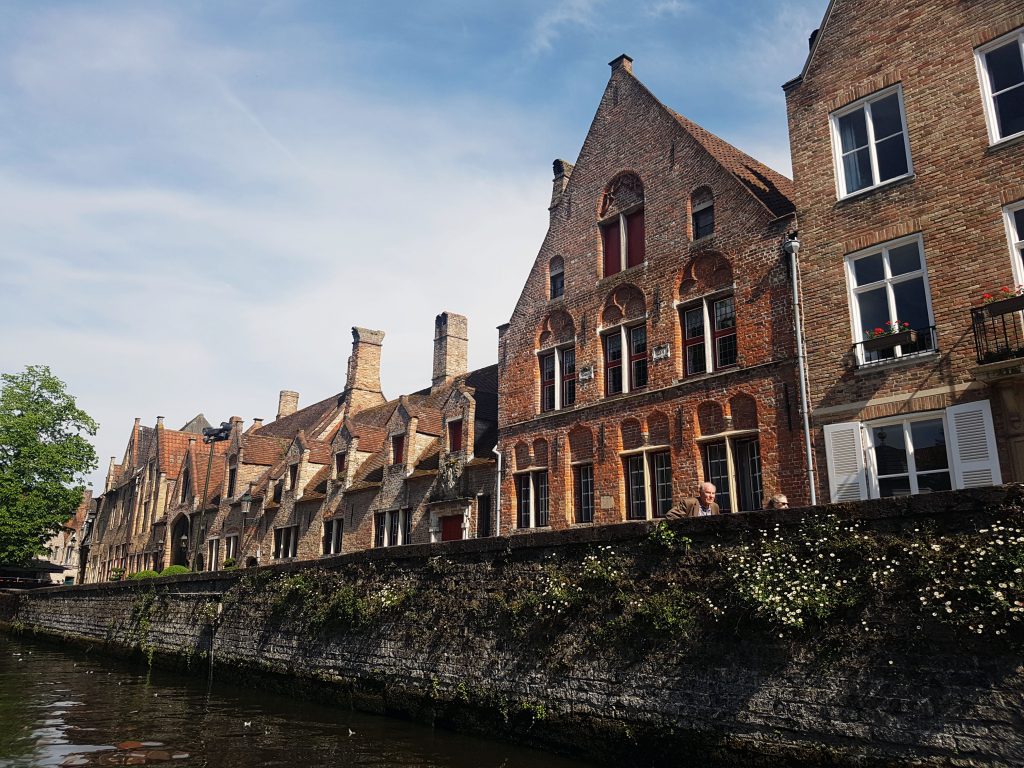 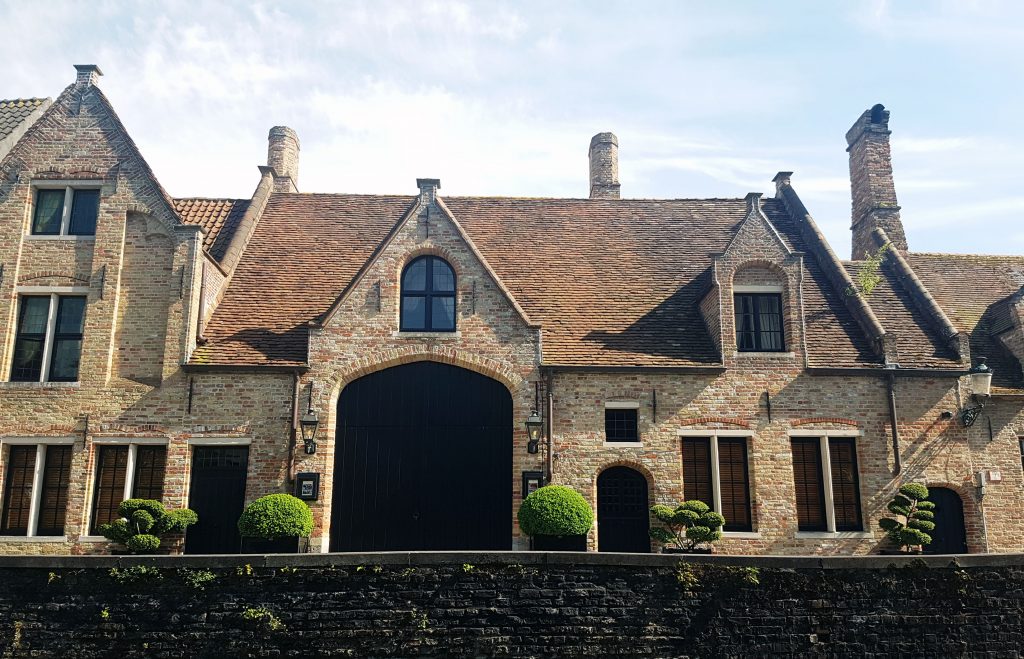 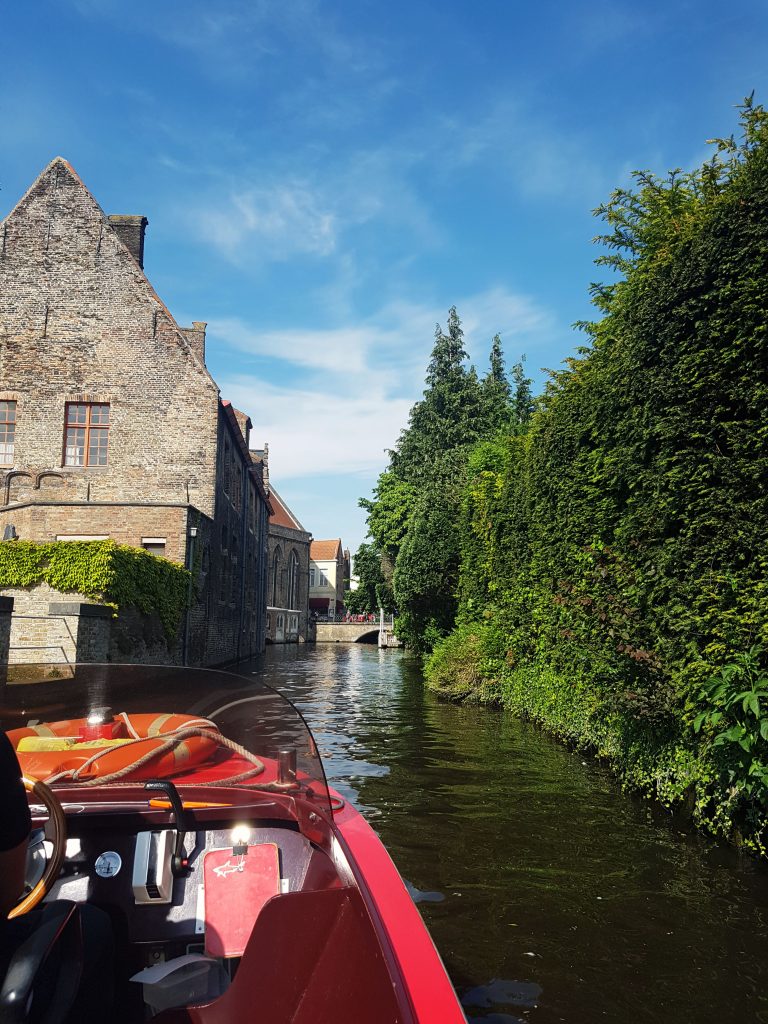 Climbing up the Belfry Tower and the canal boat tour were my favourite moments from my first day in Bruges. Nothing can really beat an amazing view, so climbing the 366 steps is very much worth it. What’s great about going on a canal boat tour is that you can start from different locations. They are scattered all around the canals so wherever you are in town you are never too far away from being able to board a boat.