I finally did it. I went to Edinburgh.

For years I’ve had so many people tell how amazing Edinburgh is and it would be a place I would love. They were not wrong.

I knew one day I would go but it wasn’t in my plans at the start of the year. However, when my intended travel plans in March did not work out Edinburgh was the natural place to go instead. History, architecture, walking, cold weather what could I not like about it?

For me what makes a trip fun and relaxing is careful planning. I want to know how to get to A to B to C in the most convenient way. Where I stay should be fairly central so I don’t have too far to get to places. Simple things that make me feel comfortable. For Edinburgh, I used Super Breaks to find a rail and hotel deal. Going by plane to Edinburgh from London would have been, however, I would have had to commute from the airport at the edge of the city. Going by train to Waverly put me straight into the heart of the city. I used the four hours plus train journey to plan what I was going to do over the coming days.

I stayed at the Old Waverly Hotel, adjacent from the train station. Convenient just the way I like it. What I really loved about the hotel was that it was a throwback to old-fashioned hospitality. What I mean by this is that the little touches were not things I had seen in a hotel for some time. For example, I was given a card to keep with my room number so I could hand the room key to reception when I went out. When I was told this, I thought “huh?” It was something I had not been asked by a hotel to do for years. Weirdly enough I liked leaving the key with them.

In the room, there was a notepad with a pen, a comfy armchair, giant bedside lamps, a huge dresser and an old corded phone. These simple things brought back memories of staying at hotels with my parents when I was younger. I even reserved a table for dinner that overlooked Princes Street and the Scott Monument. The food was delicious. I would recommend The Old Waverly as a perfect hotel to stay.

Once I dropped my luggage at the hotel in the afternoon, I headed straight out to start exploring. I walked to Calton Hill that offered many wonderful views of the city. With the sun shining it was just beautiful and one of those moments that I thought solo travelling is so good. At the top of Calton Hill were Nelson Tower, the old Observatory and the National Monument. The moon even made an appearance, right on cue. I continued walking around until the evening snapping the sights as I went.

Day two was a full on day of exploring. I visited Edinburgh Castle, went on a free walking tour and walked up to Arthurs Seat.

The Castle was very grand and I learnt a lot from the free tour you could join taking you to the top of the castle. For many centuries the castle has been more of a military stronghold than a royal residence. The Palace of Holyroodhouse was the home of Scottish royalty. The Royal Mile connects the two at either end. Highlights from the Castle are the One o’clock gun, Scottish National War Memorial, the Scottish Crown Jewels and St Margaret’s Chapel. 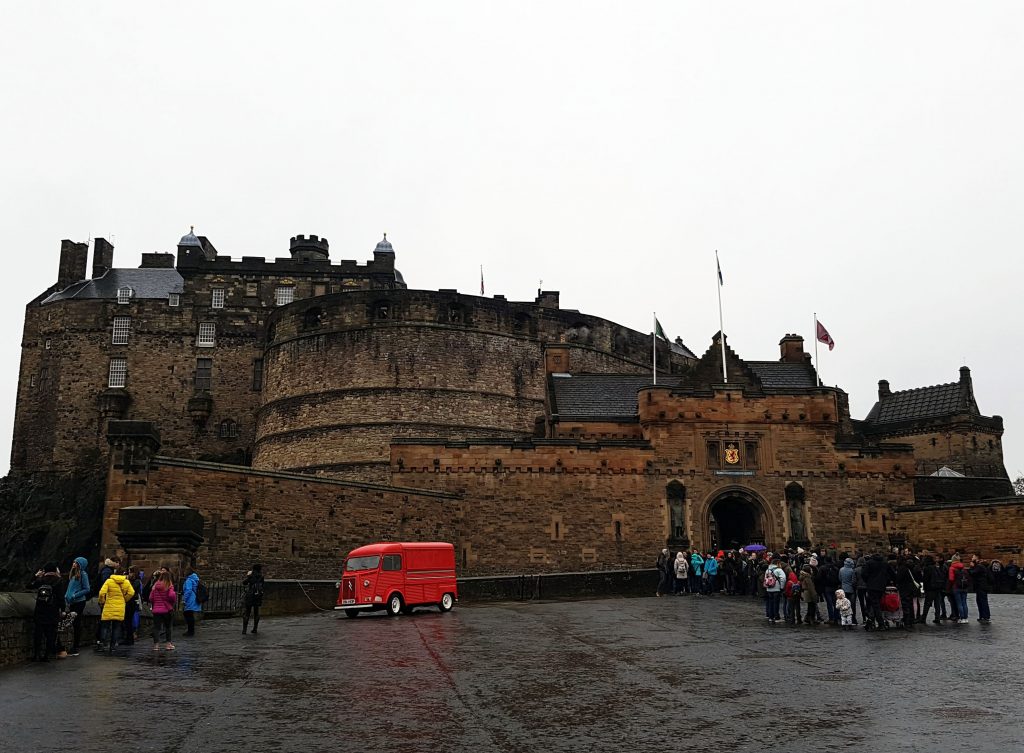 From the castle, I walked a few minutes down the Royal Mile to join the free walking tour with City Explorers Free Tour. It was the first activity of its kind I had participated in and it turned out to be incredibly rewarding. The girl doing the tour was funny, enthusiastic and informative. I was told many things and saw lots of places that I would have missed out on if I hadn’t done this tour. Free walking tours are now an essential part of any trips I do from now on.

The final activity for the day was to walk up to Arthurs Seat. A much more demanding challenge indeed. It had been raining most of the day so it was muddy most of the way up. What didn’t help was that I walked up the long way round after not continuing to follow Google maps. Oh well, I got there in the end! When I did it was very windy. So be careful if you are going up there during winter. As you near the top there is a distinct lack of a pathway. All there is are rocks, making it very tricky to navigate in bad weather. Once again the views from the top are stunning. Tip: wear appropriate shoes/boots for the walk up.

On my final day in Edinburgh, I had an indulgent breakfast at the Ivy, around the corner from the hotel before walking to the Royal Yacht Britannia. It took fifty minutes to walk there from the hotel and by doing so I saved money catching a bus. Although a little out of the way, it was worth it to experience the lush royal interiors of this grand ship. The beauty of the bedrooms, dining room, tearooms and lounge completely made you forget that you were on a boat. Totally the intention of course.

And that wraps up my trip to Edinburgh. I really feel like I made the most of the time I had, whilst having time to also relax and appreciate where I was.