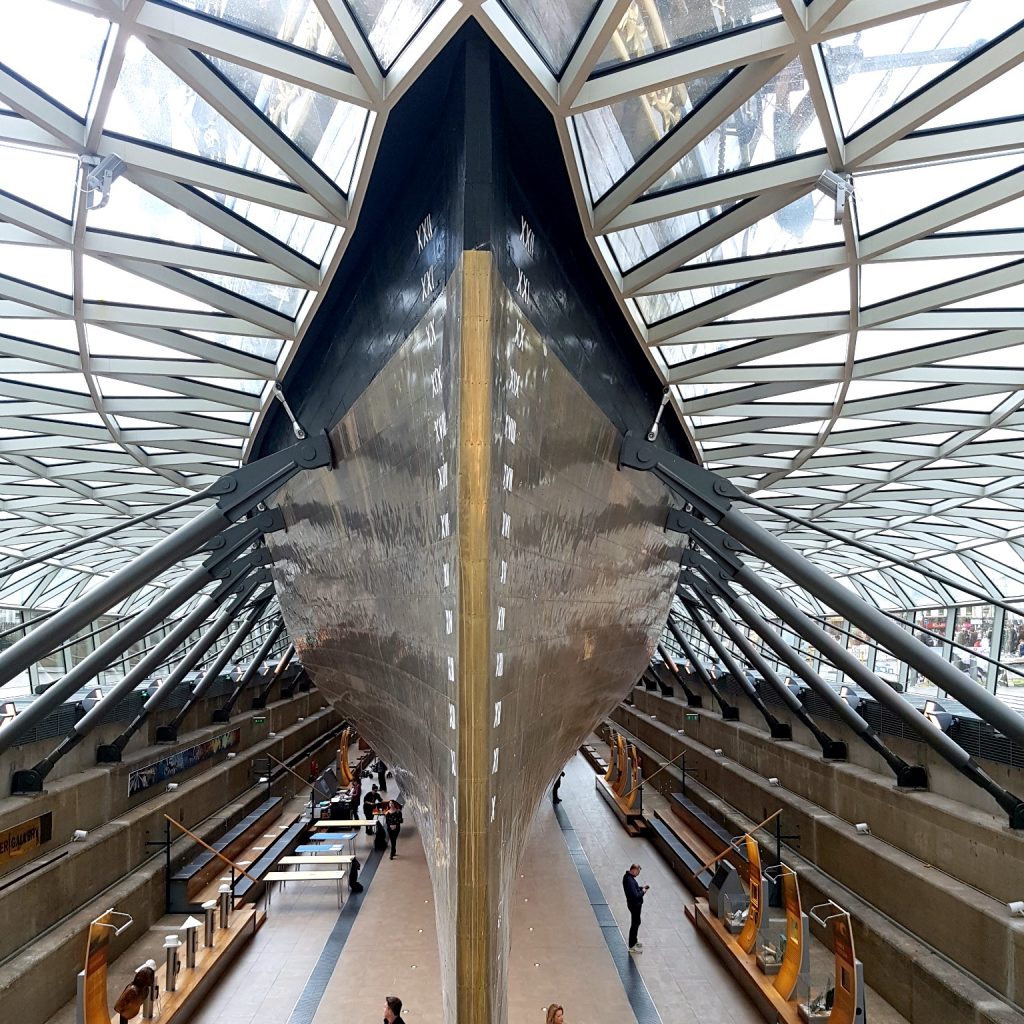 Since its launch in 1869, the Cutty Sark has been a ship made famous all over the world.

As a child, Cutty Sark was such a treat to see. There are not many attractions in London like it. It brings thoughts of the how the world once was. A time when trade across the oceans was as commonplace as cars are on roads today.

What always attracts me to Cutty Sark is that it was a real ship. Sure nowadays it has undergone much restoration to keep its structure intact but its layout and feeling are not lost. You will walk on the same planks where men helped to store tea or wool on the lower deck and live in tight quarters on the top deck.

The actual exhibition space in and around the ship is only slightly larger that the length and width of the ship itself. The entrance and exit are through the shop towards the back of the ship. The shop is where you purchase tickets at the purpose built counter. As a member, you just have to swipe your card at the barriers as I did.

On the right of the walkway to the inside of the ship is a beautiful mural.

The lower deck is where you’ll find information on the history of the ship, what cargo it carried and its journeys across the world. One thing that has appeared to change, since I was last there, is that there is now a seating area to view a short video. The video gives you are brief run down about the ship. The video only lasts a few minutes and gives you some interesting facts.

The information on this deck was displayed on stacked boxes, most likely representing cargo crates. The facts were really interesting and because it was split into sections with quick bits of information you could absorb it more easily.

“The British preferred black teas to the more delicate green teas and imported more black than green. No-one is certain why the custom of adding milk to black tea arose, although it goes back to the 1680’s”. 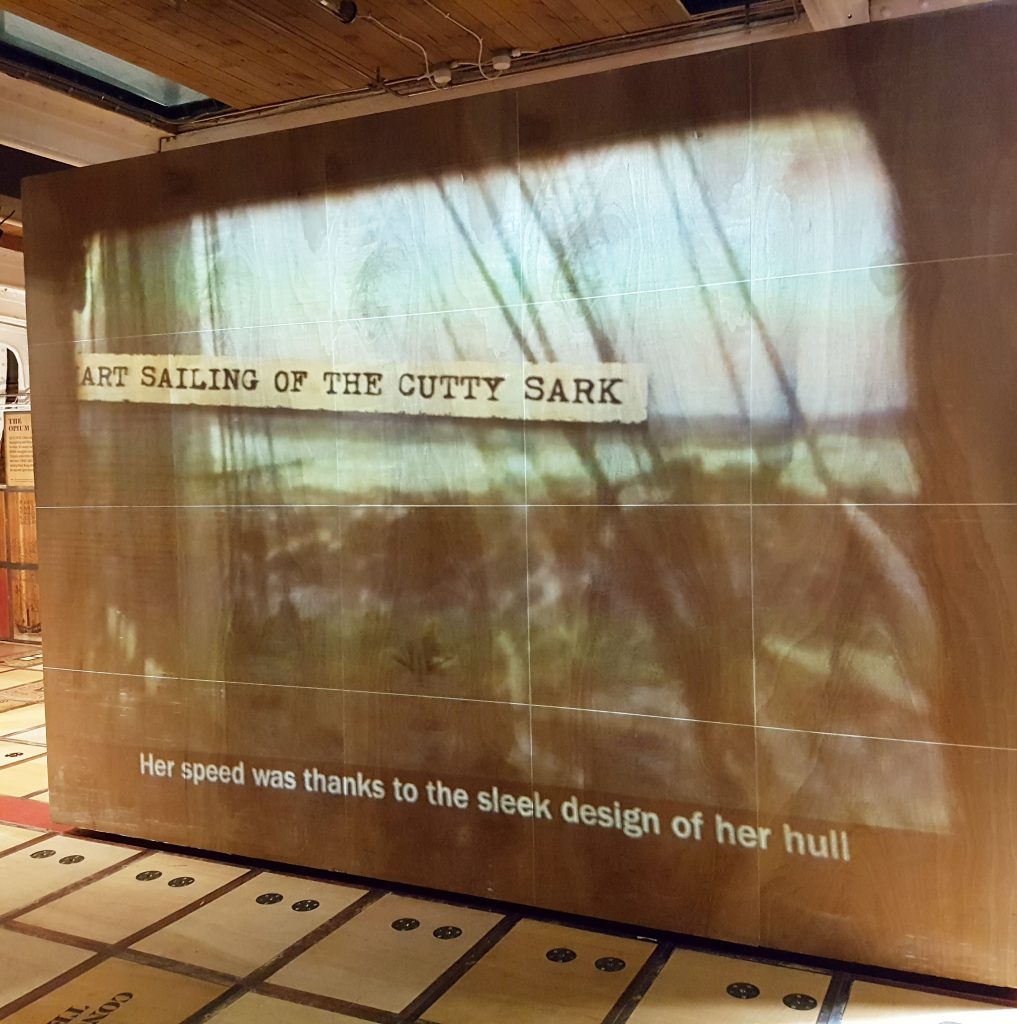 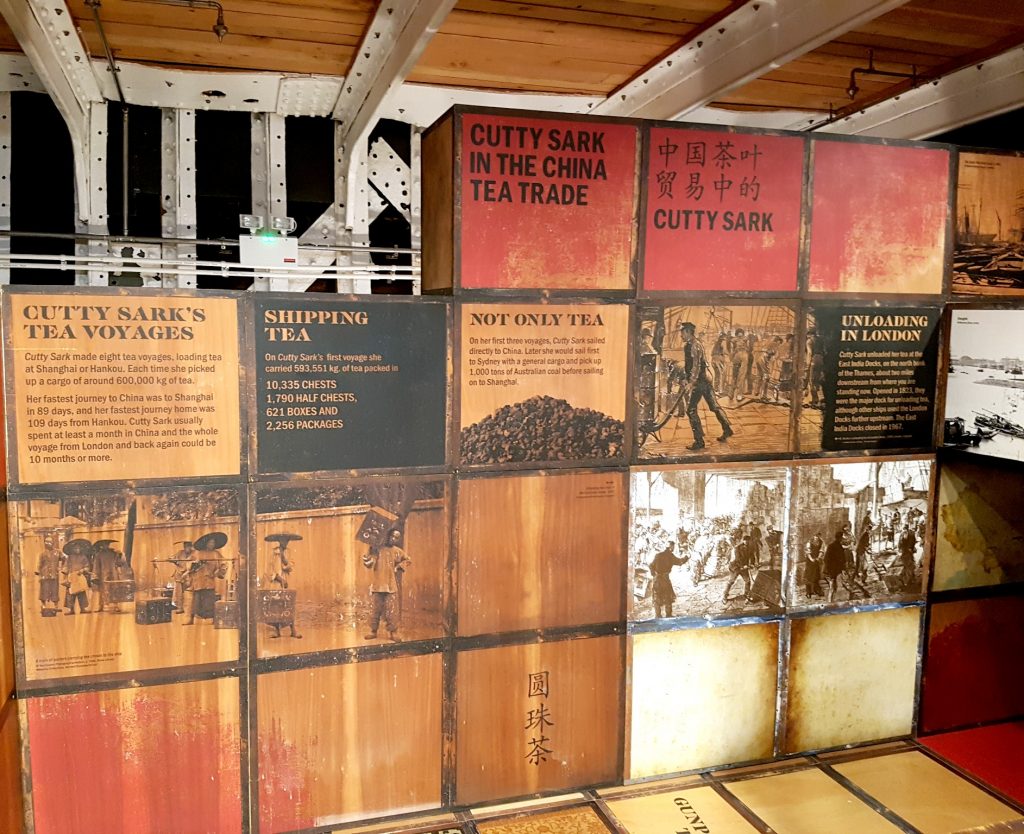 When I walked upstairs to the middle deck I noticed one thing immediately, there is much more space. The deck is now the width of the ship as oppose to the lower deck which had a narrow walkway. The ceiling was quite low with large beams, so remember to duck if you are quite tall.

The middle deck is much more interactive. The information is about what life was like on the Cutty Sark. The interactive screens showed the Cutty Sark’s ports of call, the voyages it took and what the ranks of the men on board meant. I spent a bit of time on one of the screens and found it quite responsive and easy to use.

On display around the deck were objects that the ship came across during its travels. The Star of India I thought was pretty cool. After looking around this deck I was getting a better understanding of what it was like to be on the ship during its time of use. 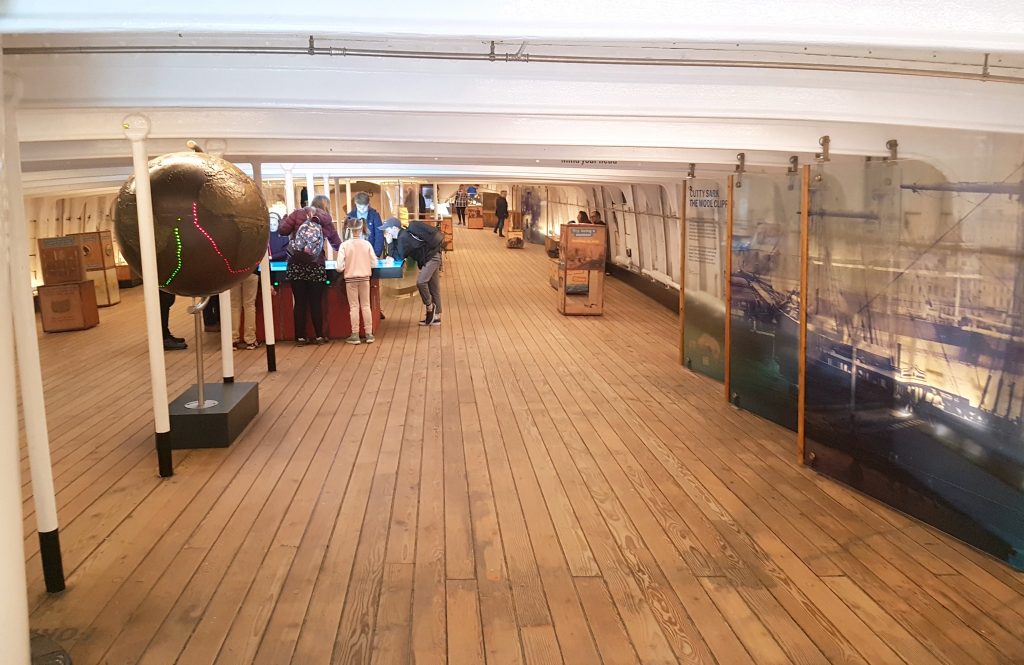 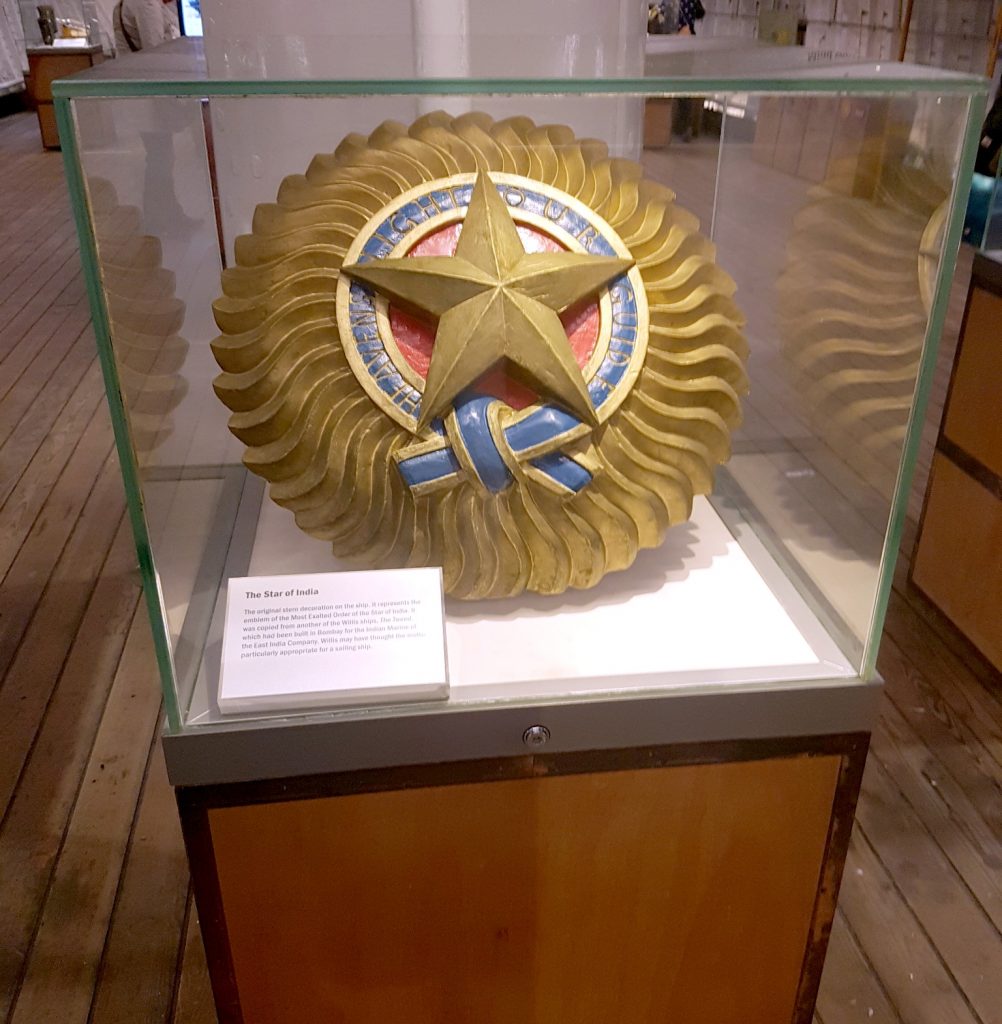 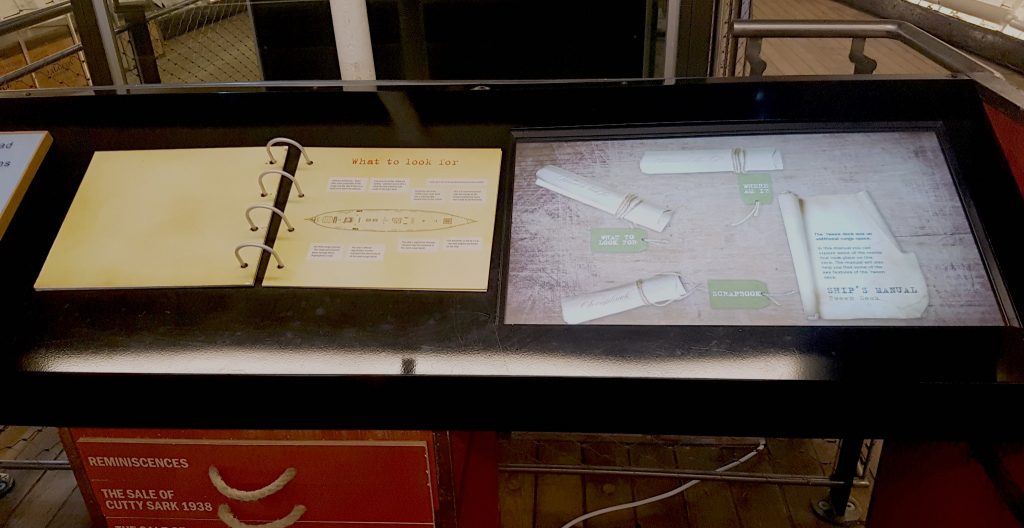 When I stepped onto the top deck my reaction was wow! The views of the surrounding Greenwich area are brilliant. Imagine being at sea and looking out onto other beautiful places in the world.

You can enter into the cabin areas, where you can really experience the difficult living conditions. The space to lie down looked so tiny that I wondered if anyone could lay straight. The captain’s cabin was better but only slightly in my opinion. The rooms for first mate, second mate, steward and pantry were so boxy. Imagine being at sea in terrible weather, you’d just be bouncing off the walls.

I was asked to take a photo for a foreign family, so being the gent that I am I duly obliged. The weather was a bit grey so not ideal but at least it wasn’t raining. There was a festival happening on the pavement below, so I just chilled over the side of the ship looking at what was going on for a minute or two. 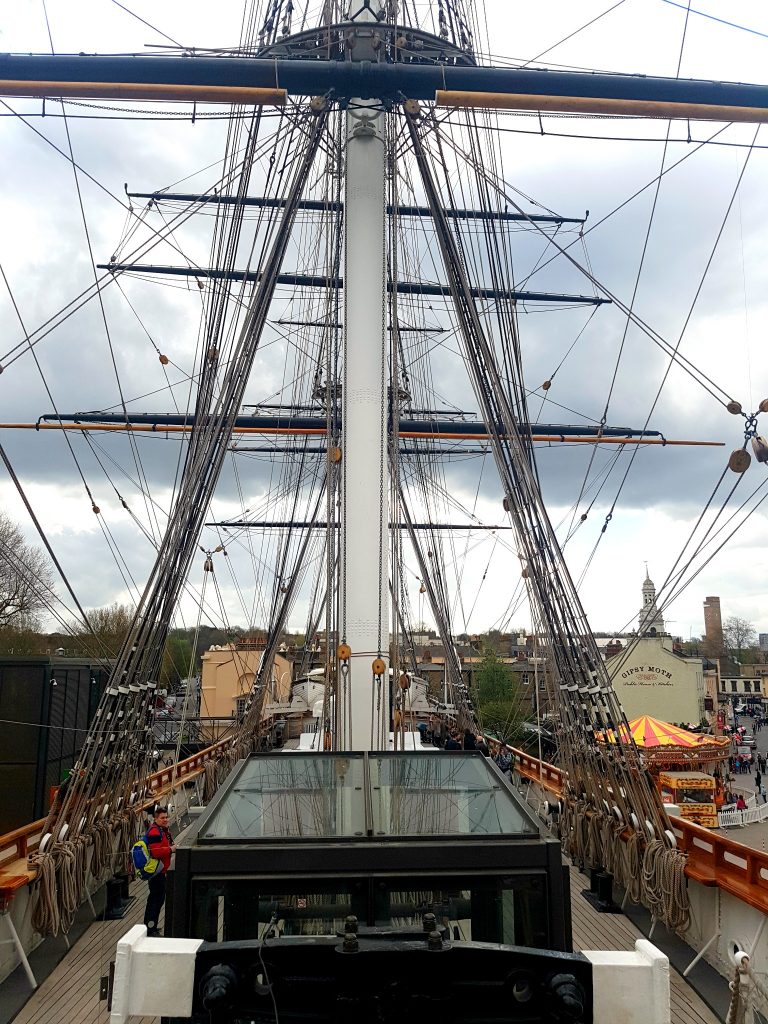 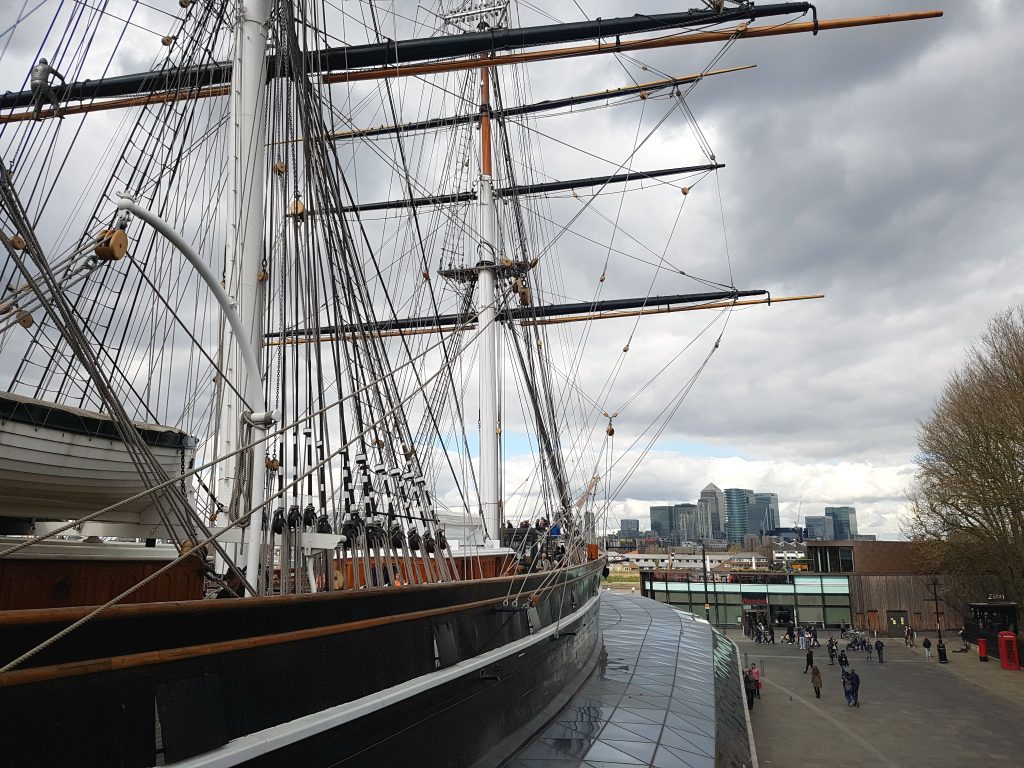 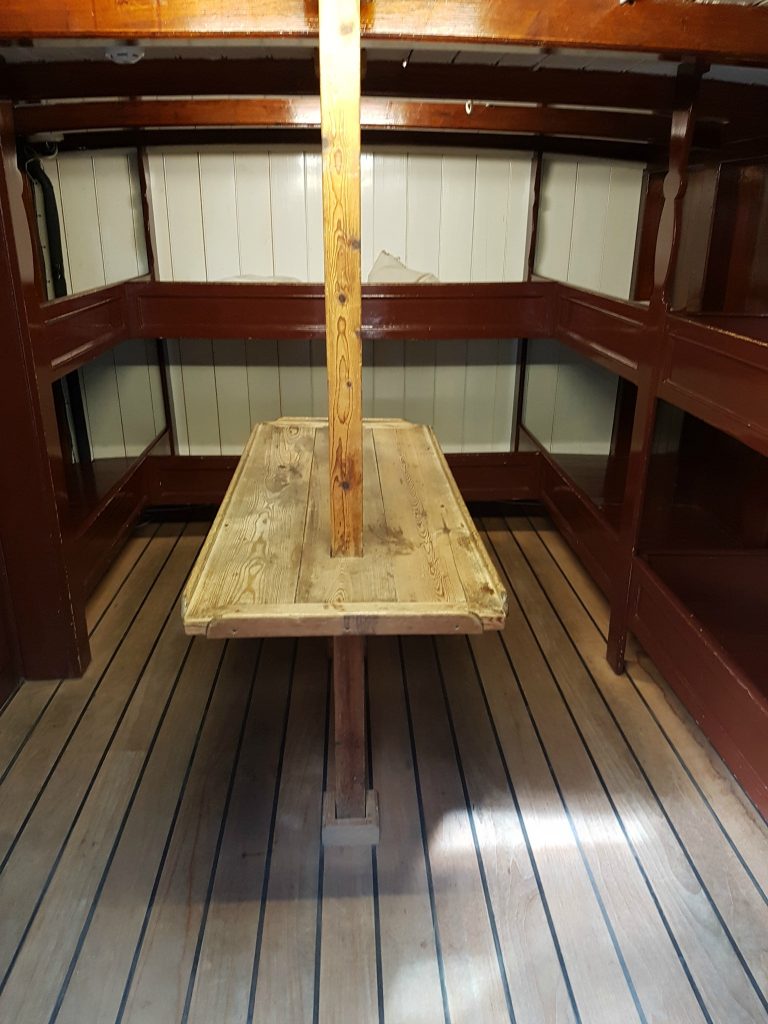 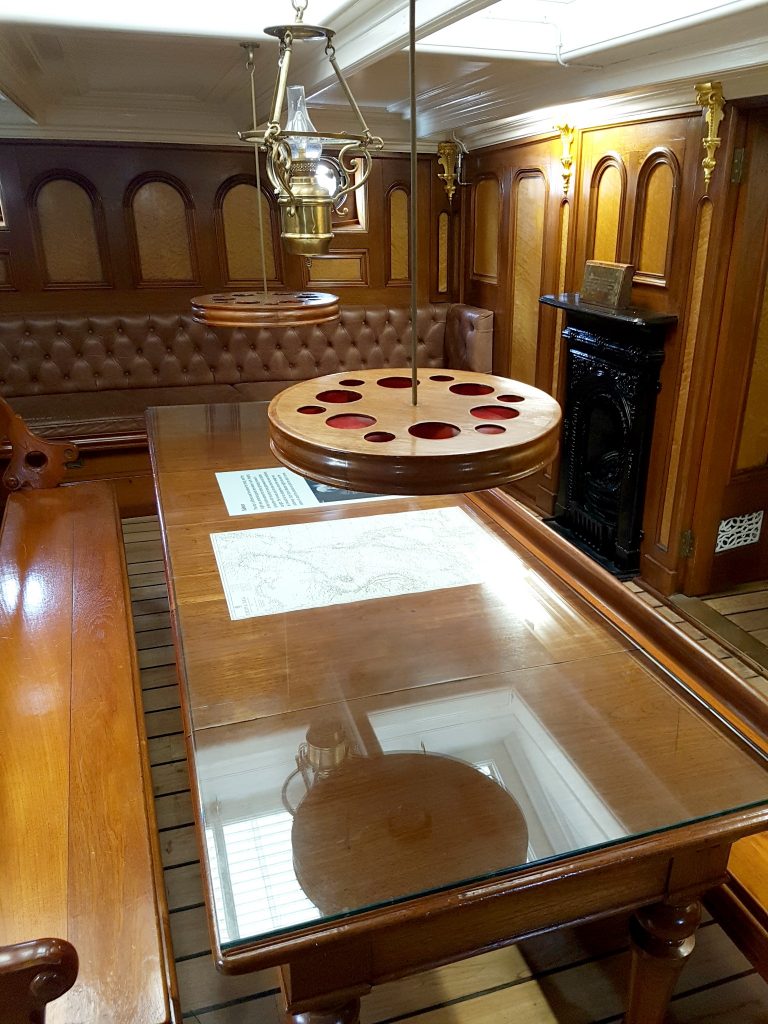 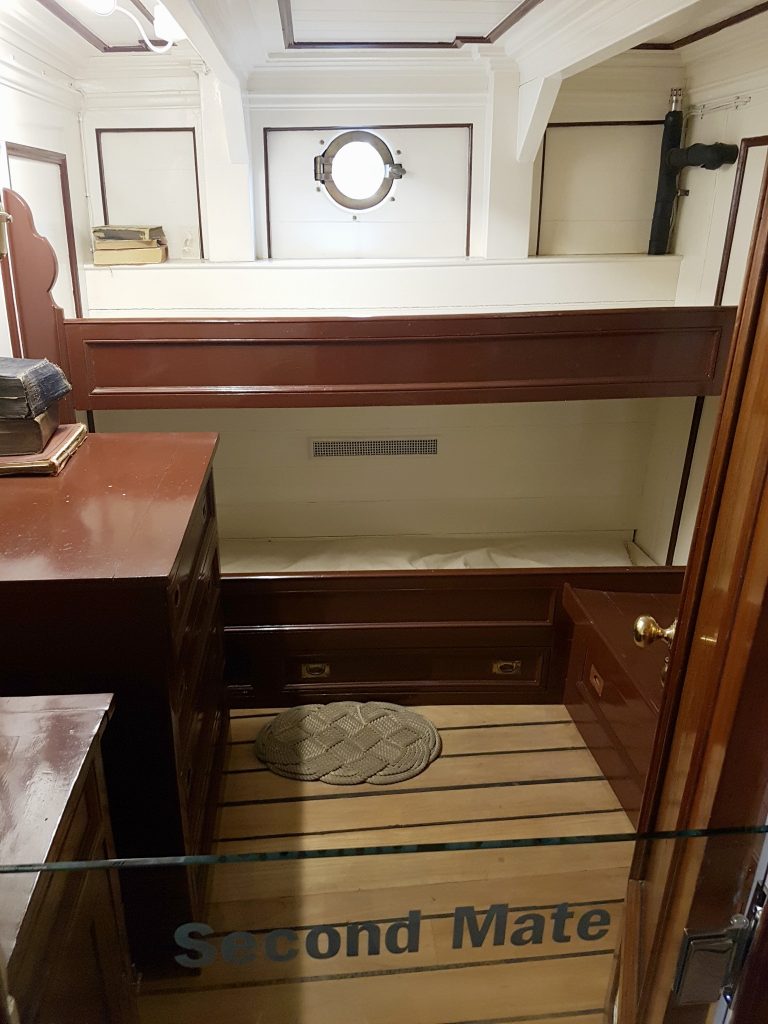 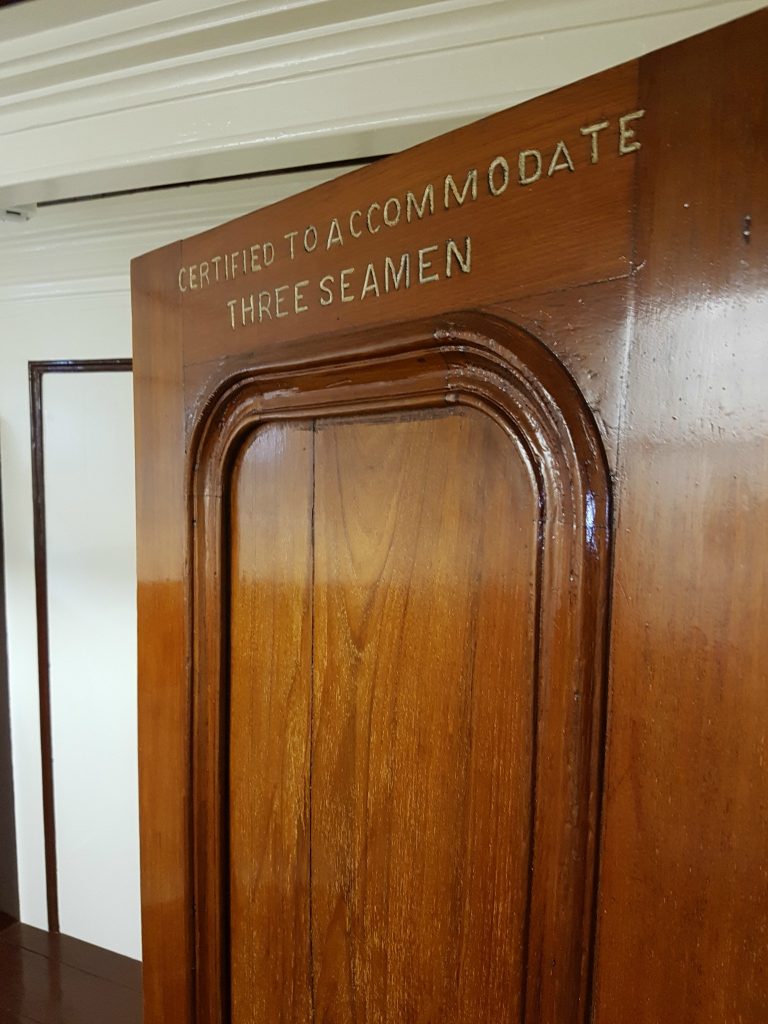 Before leaving the Cutty Sark exhibition space you had to pass under the ship. It is a wonderful site. At the front end is the Long John Silver Collection of figureheads. You can walk up above these figureheads to look back at the hull of the ship. This provided what may be my favourite photo of the day.

At the other end is the cafe Benugo. I had a Portuguese tart, fresh lemonade and a hot chocolate to accompany me as I wrote notes in my journal about my visit (the tart was yummy by the way). You can order afternoon tea too. It wasn’t advertised on the menu so maybe it’s something you have to book in advance? 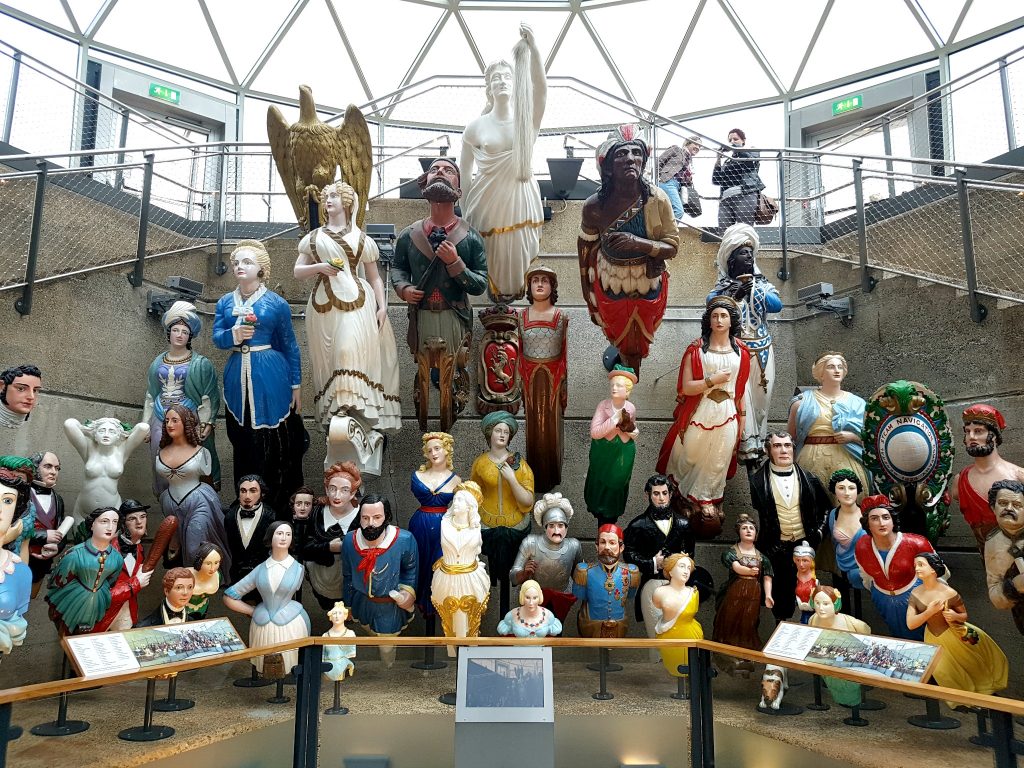 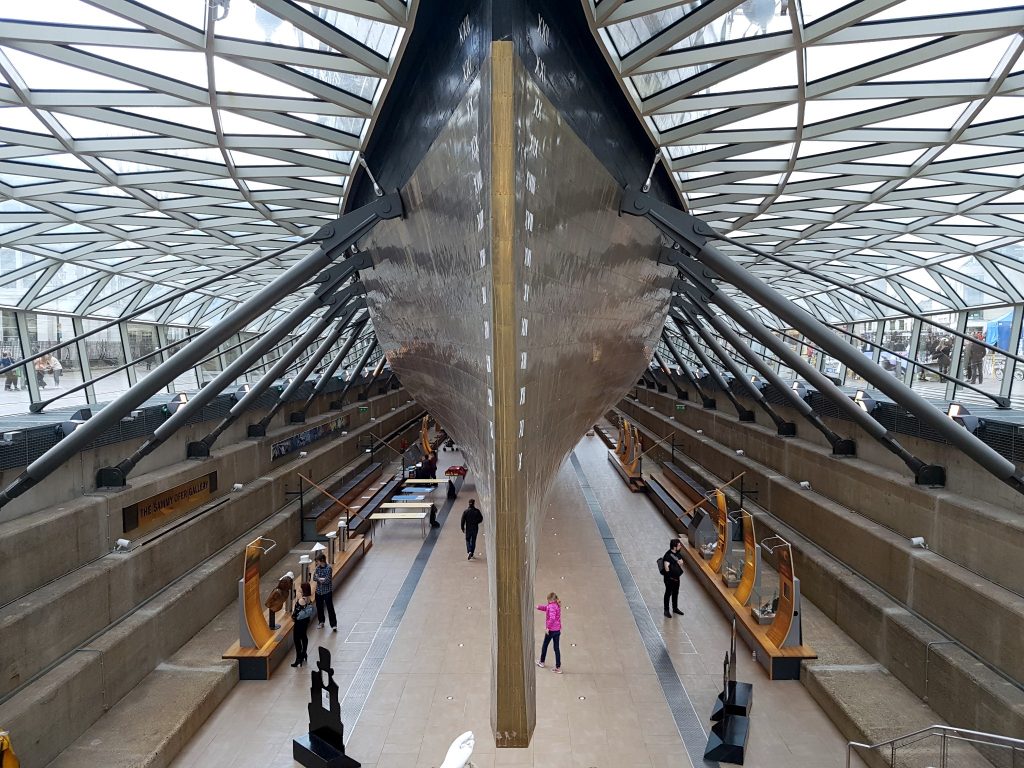 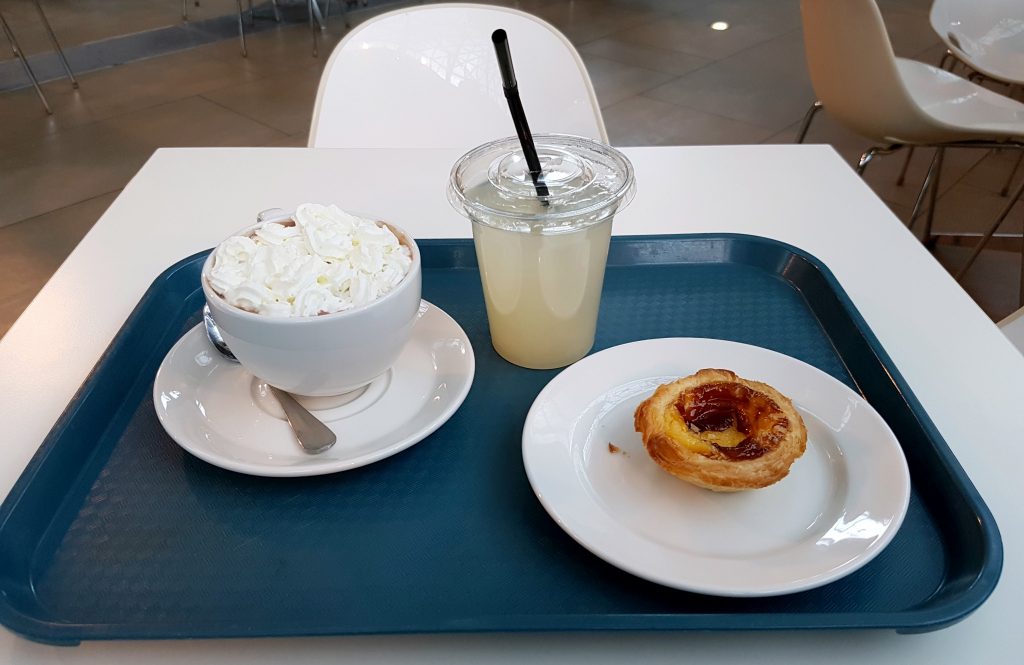 I found my visit to Cutty Sark to be informative, engaging and relaxing. It was busy but ever to a point where you could not walk around at your own pace. It’s quite accessible as well. A friend from work said that she has been there with her children and there are lifts that take you to all decks.

Due to the nature of the space, I never felt like there was just too much to see. You could be at Cutty Sark for an hour or two and that would be enough. Compared to a bigger museum with many exhibitions to look through that can take three to four hours. The top deck and underneath the ship were my favourite areas. Events do happen under the ship, like a silent disco. So that space is utilised in many different ways. There is a buggy park if you do bring little ones along.

Have you been to Cutty Sark before?