A passion for Castles

I have a fascination with castles. I am drawn to them like a moth is to a flame. When I visit them I feel like I am taking a step back in time. I believe preserving relics from out past give us a greater understanding of how life once was and in many cases still is today. Windsor Castle, of course still has so much relevance because it is one of the official residences of Her Majesty Queen Elizabeth II. If you were wondering, the Queen is officially in residence at Windsor twice a year; at Easter and in June, when the Garter Service is held in St George’s Chapel. However, The Queen and The Duke of Edinburgh spend most of their private weekends at Windsor. Not a bad place to spend your weekend. A private weekend for me would probably be sleeping in all day Saturday (if only that would happen).

Round Tower and Moat 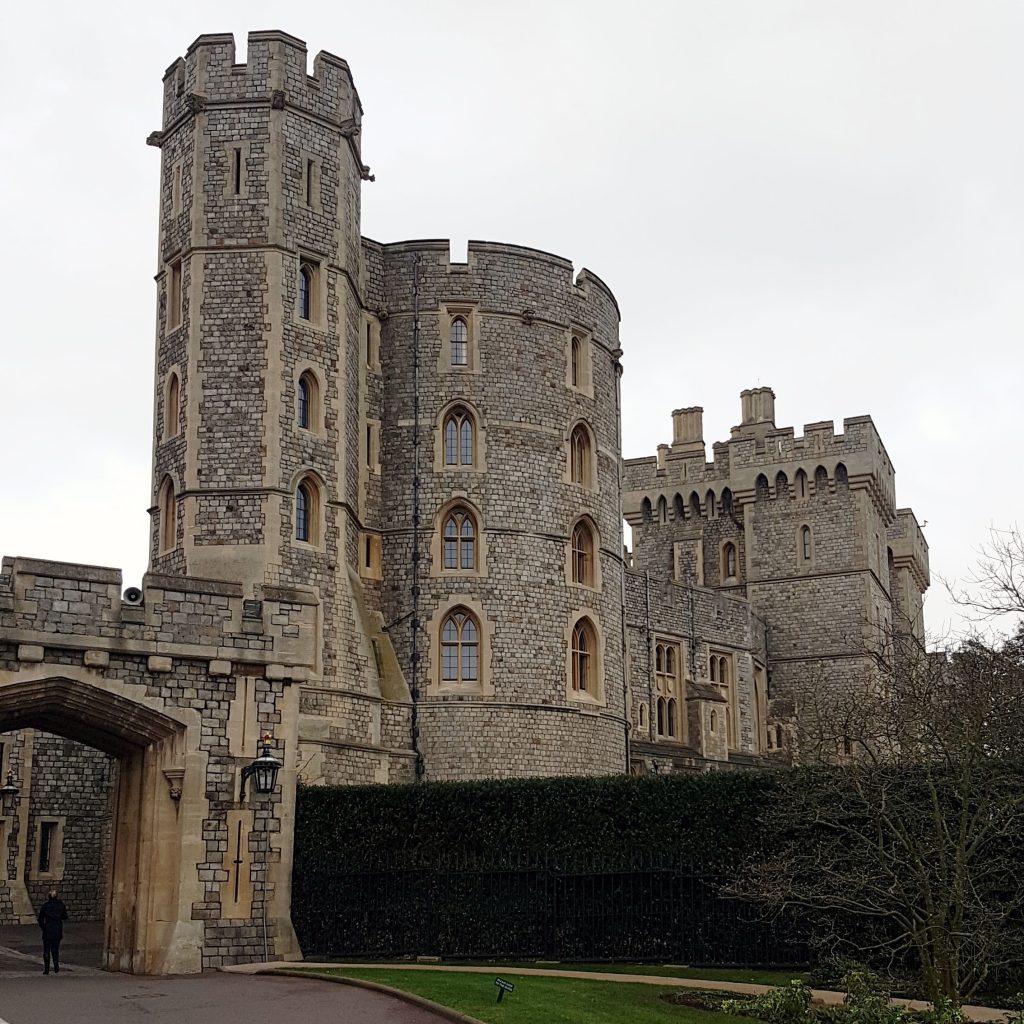 Looking around Windsor Castle was a new experience for me. I hoped to be amazed and learn new things. After passing through security and collecting my auto guide that comes with your ticket I was walking up Castle Hill past Jubilee Garden. As I started to get closer to the walls and towers I had seen from a distance, I appreciated the detail of the brickwork and windows etched into them. Walking through the Elizabethan gate I got a glimpse of the green area adjacent to the State Apartments. It can be seen through the railings of another gate and made me want to explore the castle even more. At this point, I was taking photos of all sorts of things I found interesting, like doors and brick walls. Just you know,  the random things bloggers do. 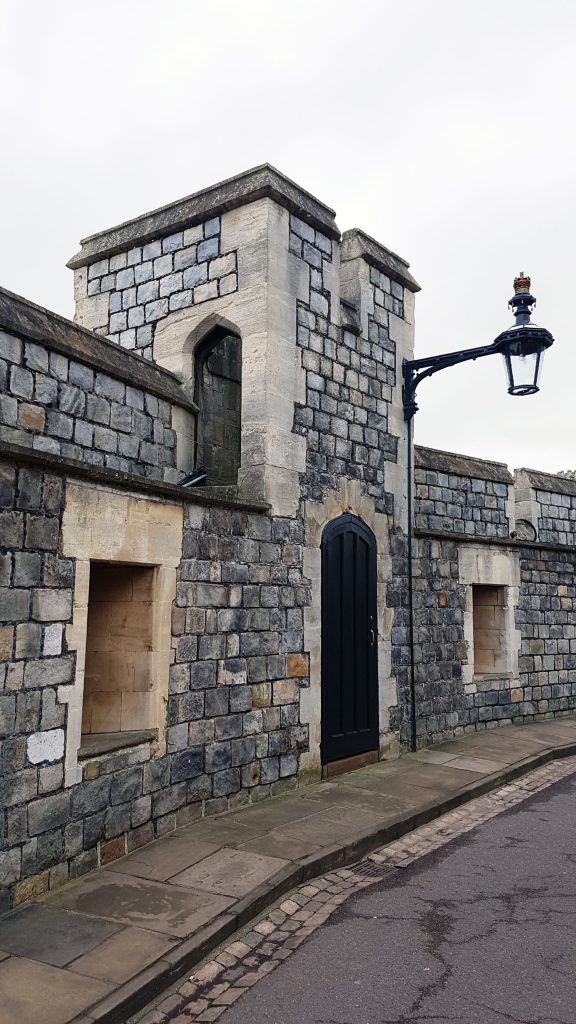 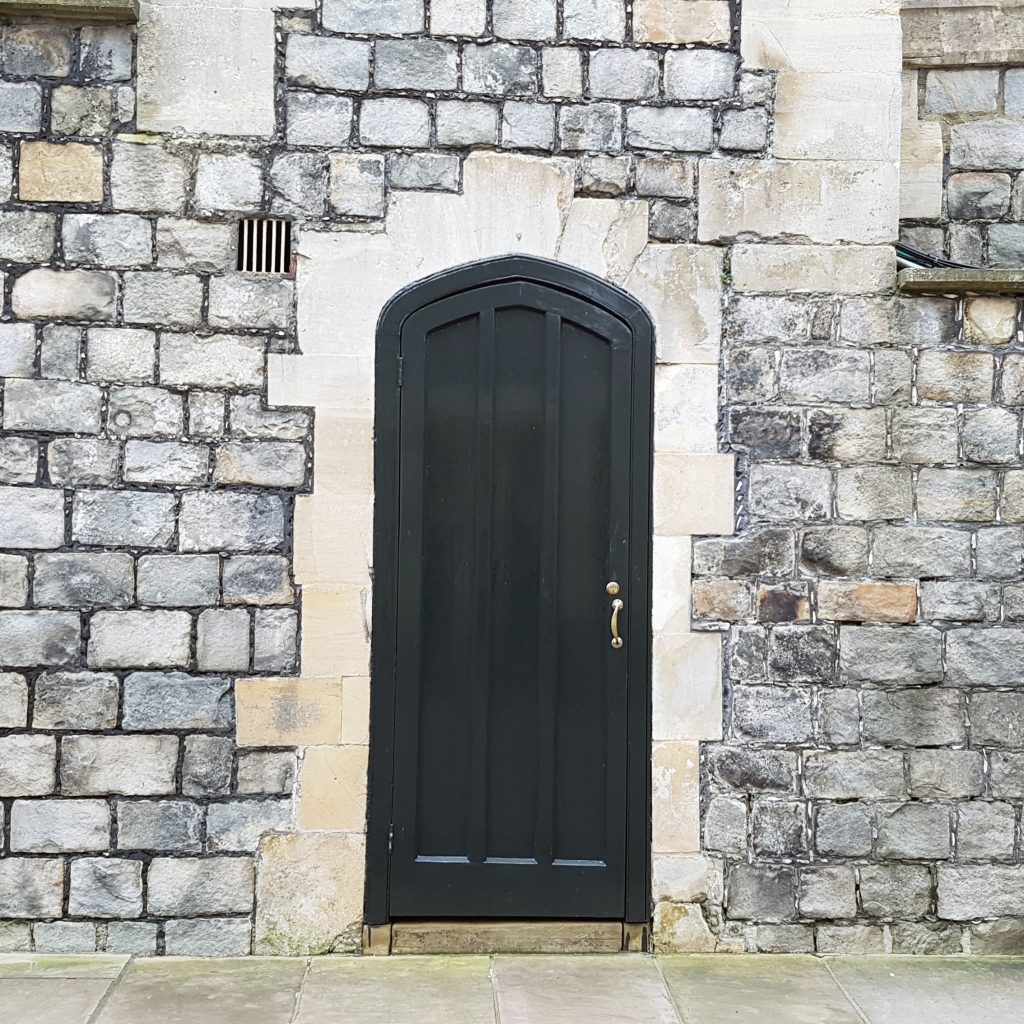 I followed the path along the uneven road, where the walls disappeared and revealed the beautiful site of the Round Tower. By now I was snapping away like crazy. It was a majestic sight. As you might expect the moat surrounding the tower was impeccably maintained. There was a cute garden area with a pond and benches. The photos I took of the moat garden are amongst my favourite from Windsor. Just imagine how perfect it would be to be able to pop down to the moat after a busy day in the castle and relax in such a beautiful location. 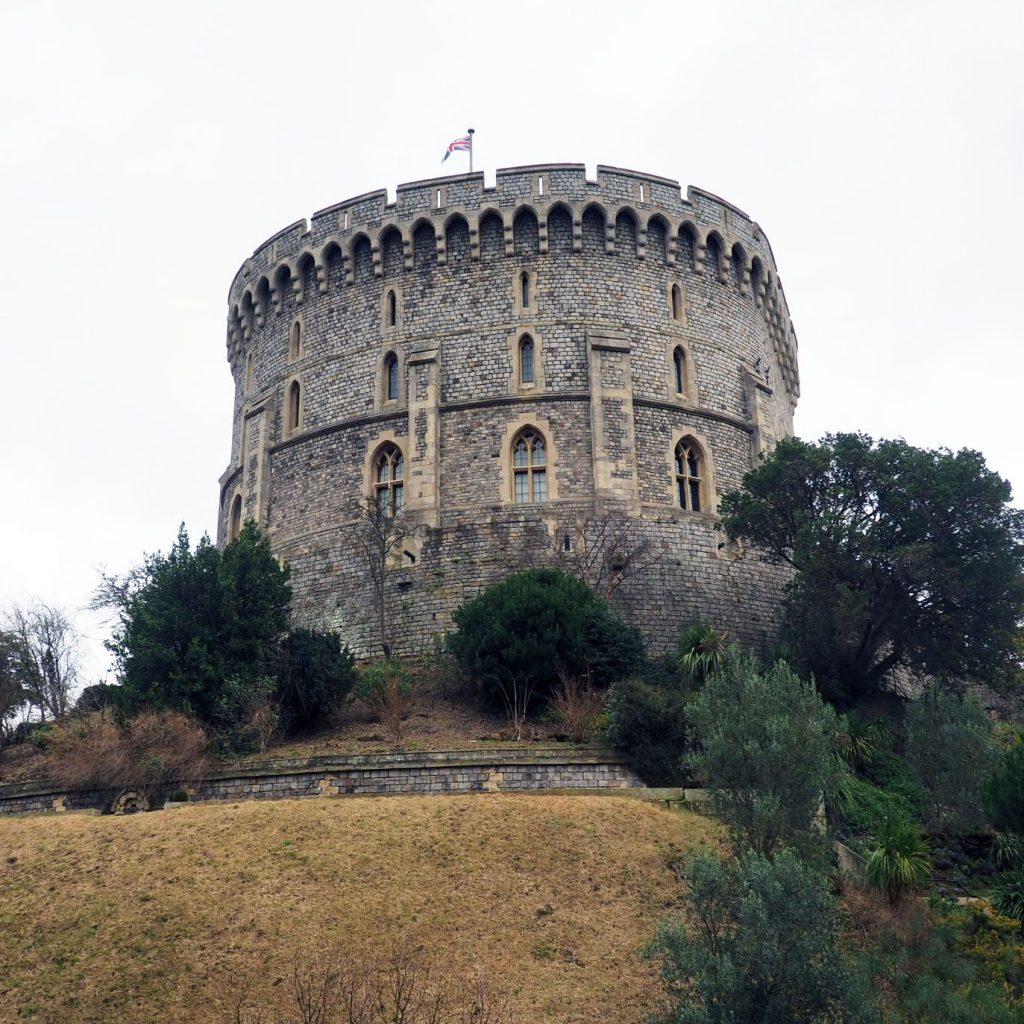 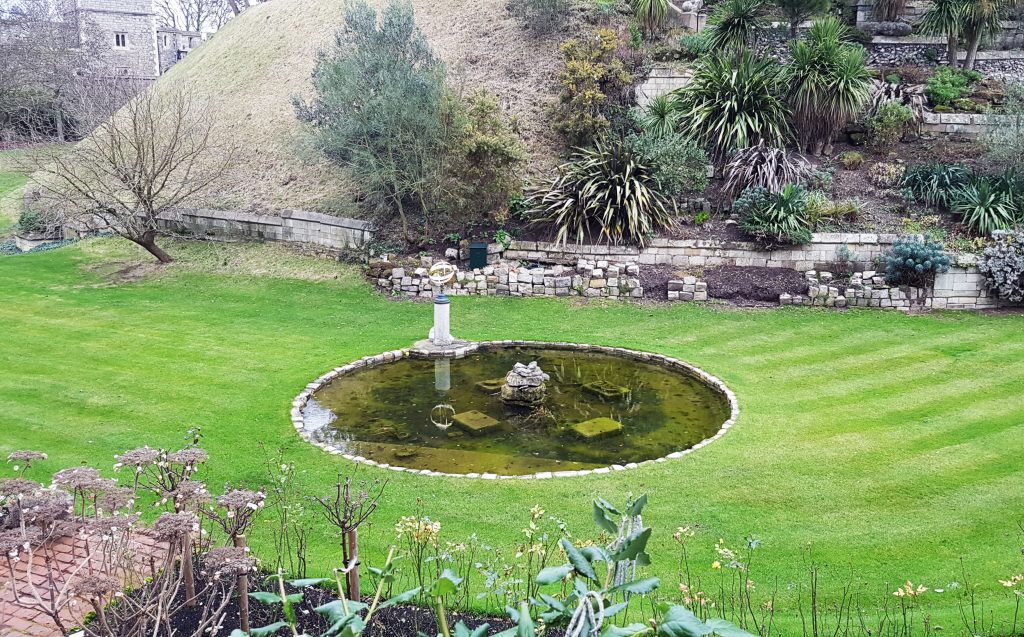 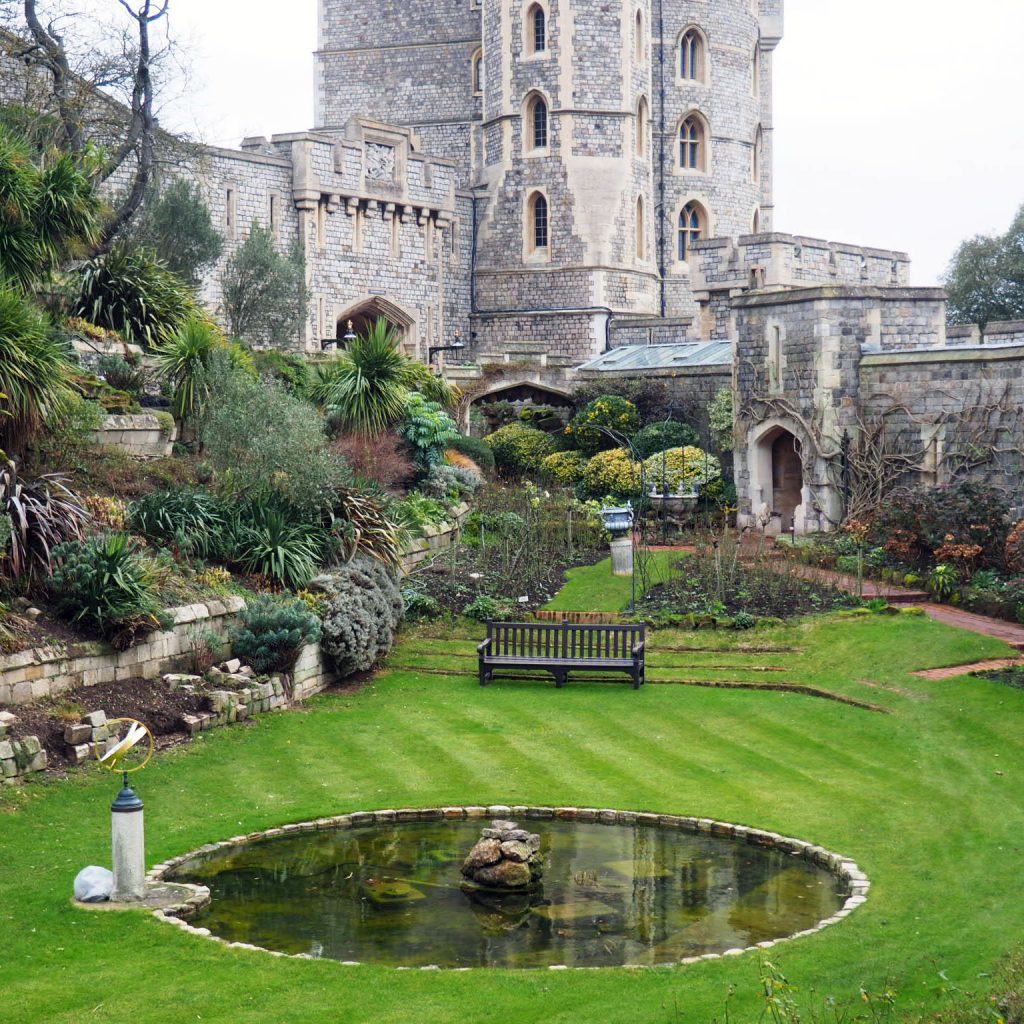 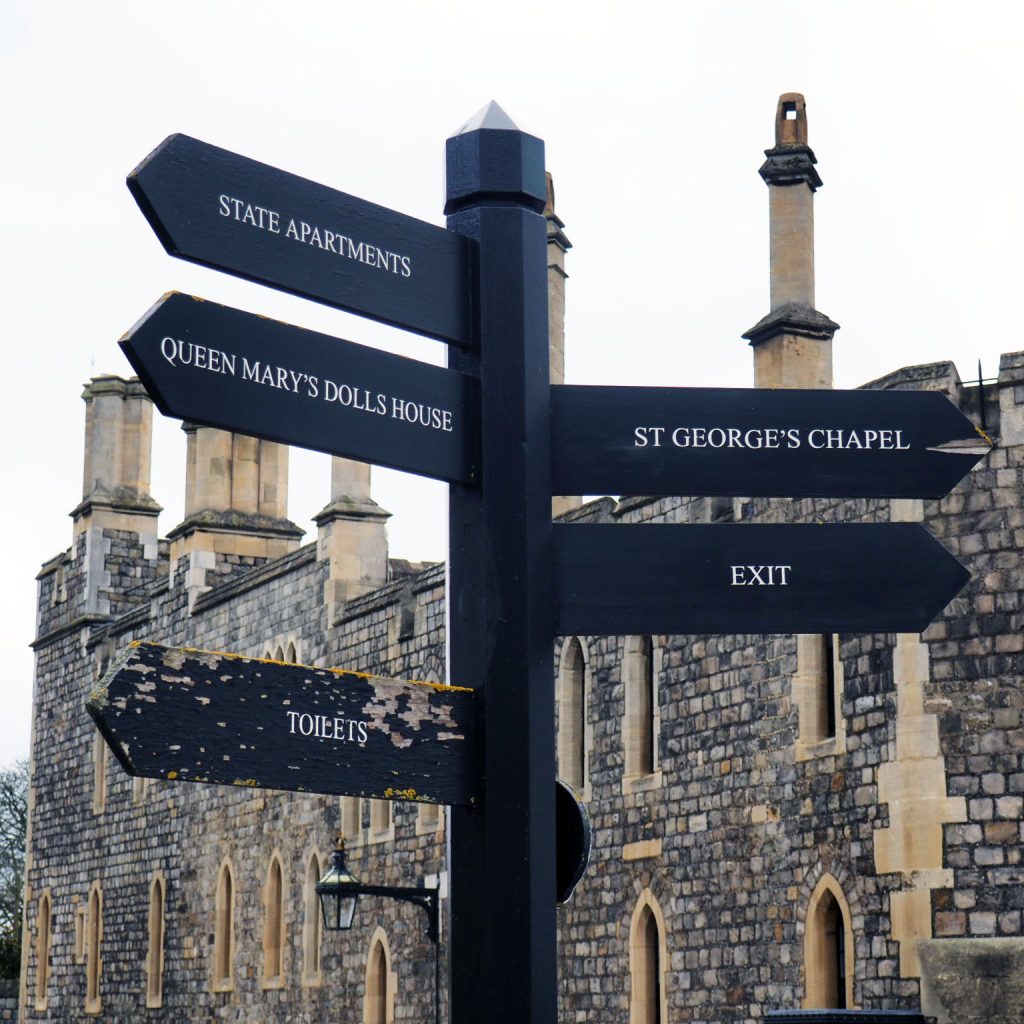 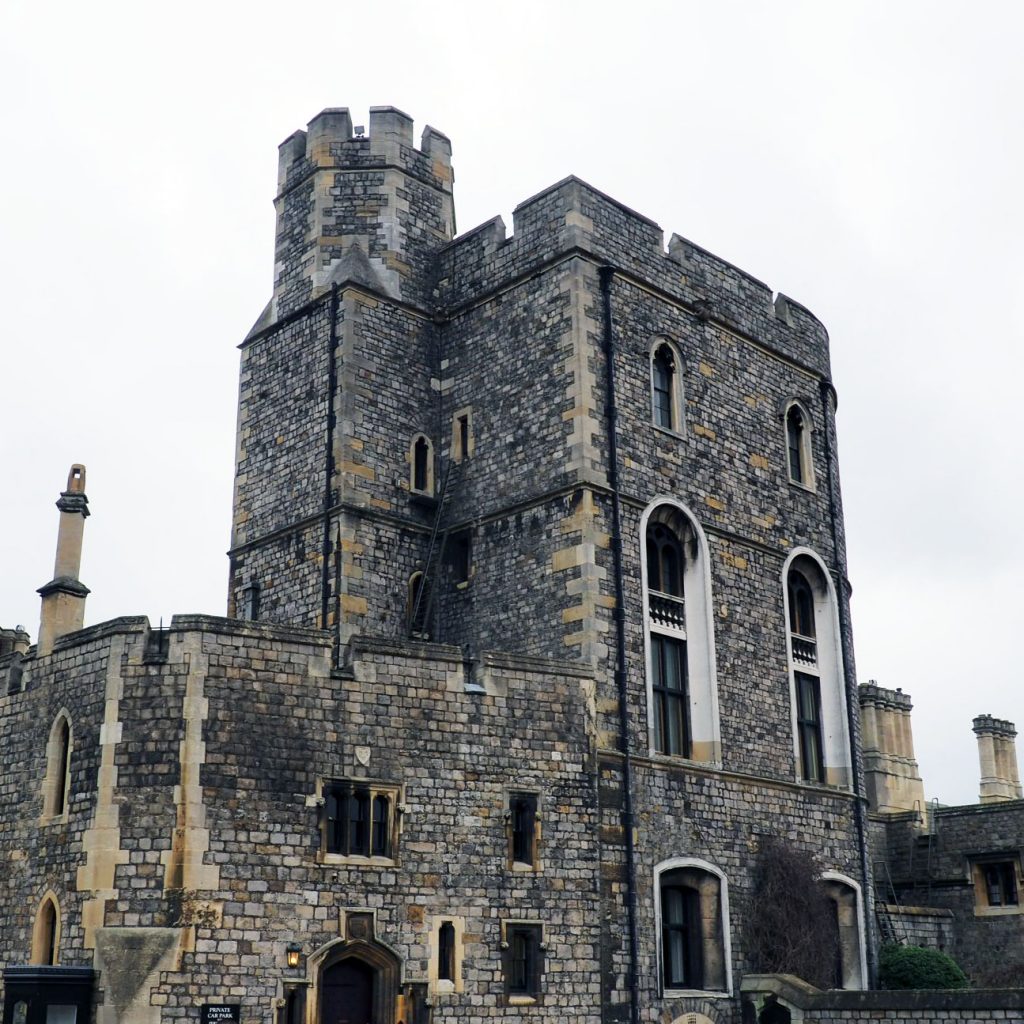 At this point, I was looking like a proper tourist. I had a camera and audio guide around my neck, headphones over my head and I was looking at a map to see where I was going (I look like this quite a lot when I explore new places). From following the path around the moat you are sort of at a crossroad. You can either go down to the Lower Ward towards St George’s Chapel or continue through Middle Ward, where I was to the North Terrace. I continued towards the latter that would eventually lead me to the Dolls House.

The North Terrace is where you can see out over Windsor. However, you don’t get much of a view because there are trees blocking it. A shame but sometimes you can’t fight against nature. I did try and pull off some photos but to no avail. It was only at this moment when I turned around I realised that a small number of troops on sentry duty had passed behind me and were marching along the North Terrace. Of course, they attracted much attention. Half way up the North Terrace I walked up some stairs, which lead to an area overlooking the field adjacent to the State Apartments. I now had a clear sight of it to take a perfect photo. 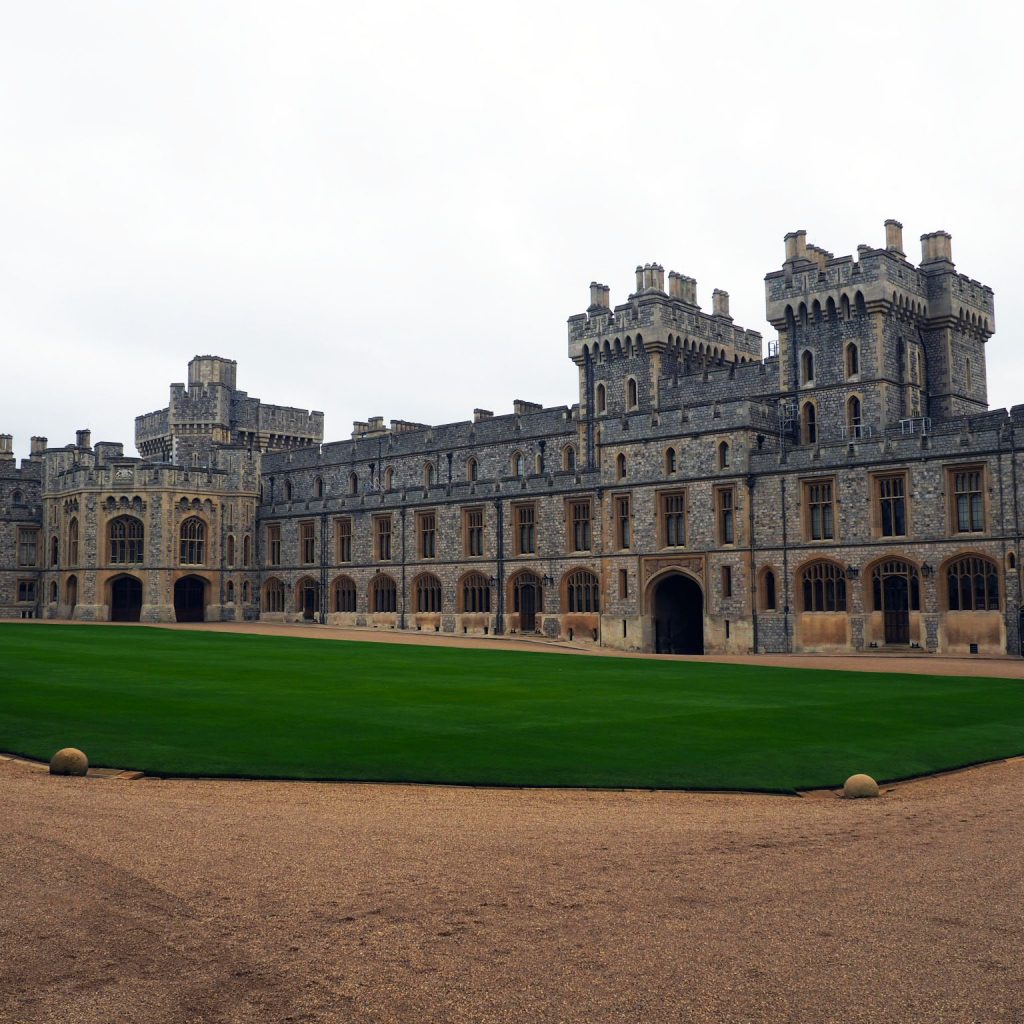 At the end of the North Terrace, is where the Doll’s House is. Unfortunately, no photo’s can be taken of the Doll’s House. It was built in 1924 for Queen Mary but was never intended as a child’s plaything. The intention of the architect, Sir Edwin Lutyens was to create an accurate record of an aristocratic London house of the time. The house is filled with objects on a scale of 1 to 12, made by leading artists, designers and craftsmen of the time. Incredibly the house even had running water and electricity. The level of detail that went into objects so small shows the level of craftsmanship. Incredible.

The entrance to the State Apartments is also located along the North Terrace, however, at certain times during the year, they are not open to the public. The Saturday I went was one such occasion. To account for this the price of entry to the castle lowers. As with some locations now, you can have your ticket stamped and use it again within the next year. 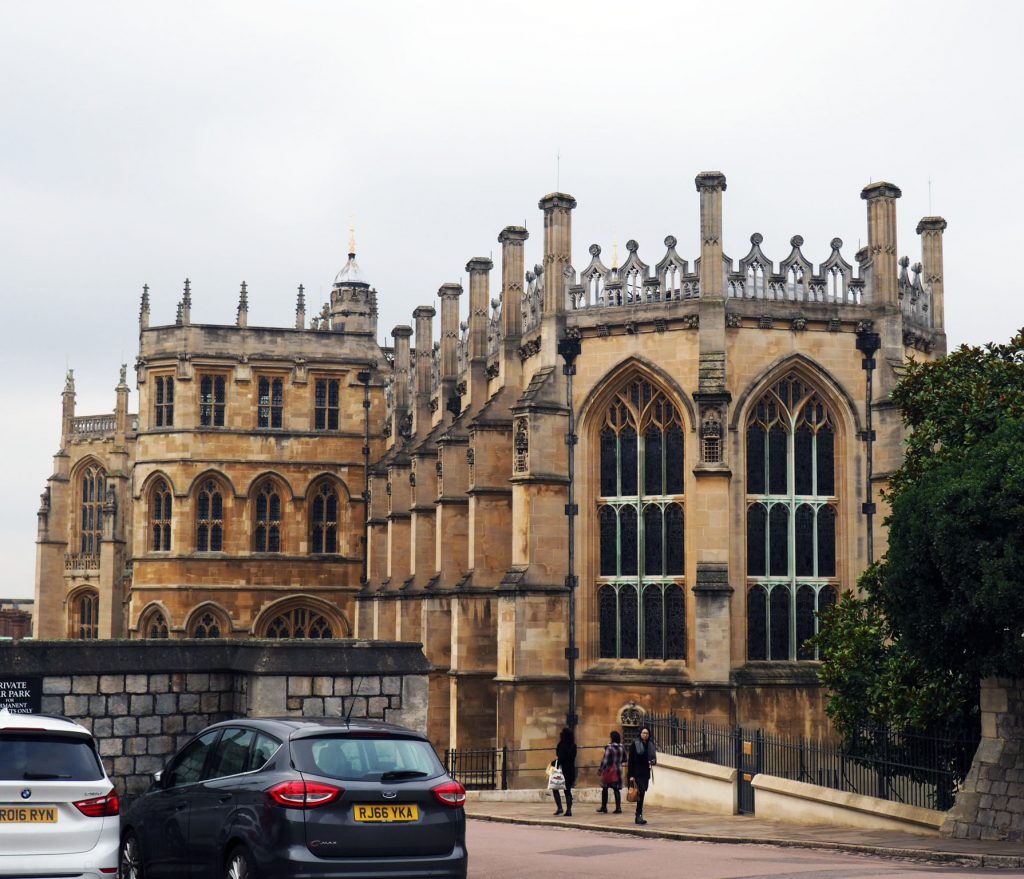 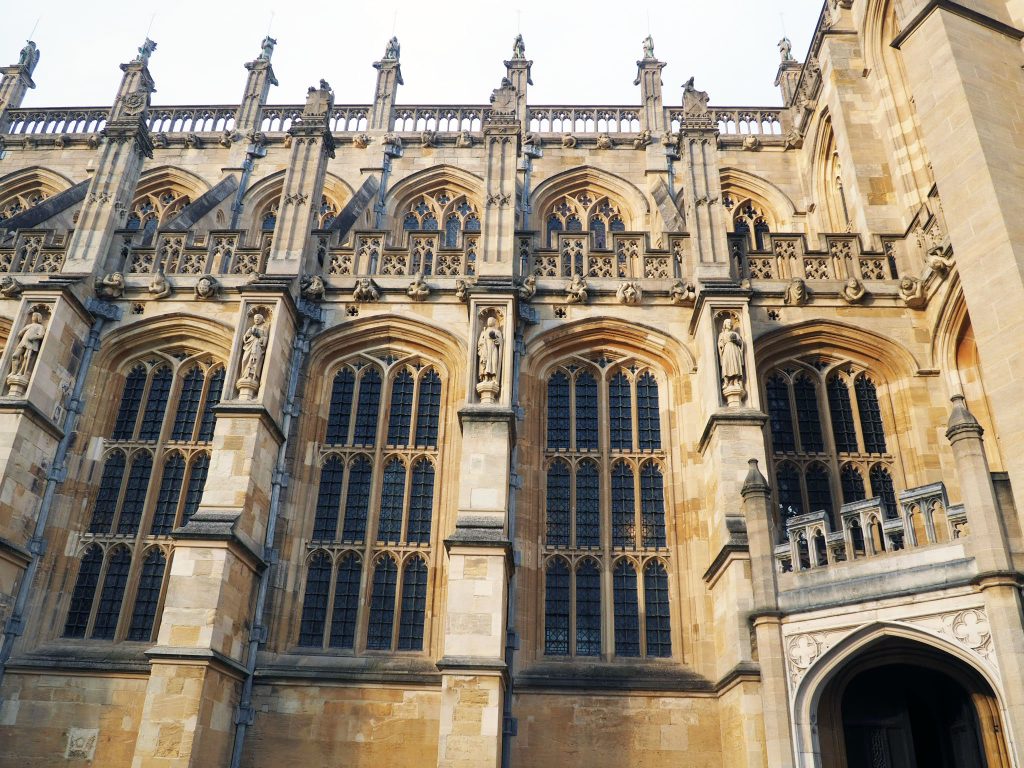 The final leg of my walk around Windsor Castle was to the Lower Ward to see St George’s Chapel. The Lower Ward is also where to see the residences of the Military Knights of Windsor. The Perpendicular style characterised by large windows, tall pillars, focusing on grace and elegance is what can be seen in the design of the chapel. I sat in the chapel listening to facts about it and was very much at peace. That’s the overall feeling I get when I am in a place of worship, even if it is filled with tourists. 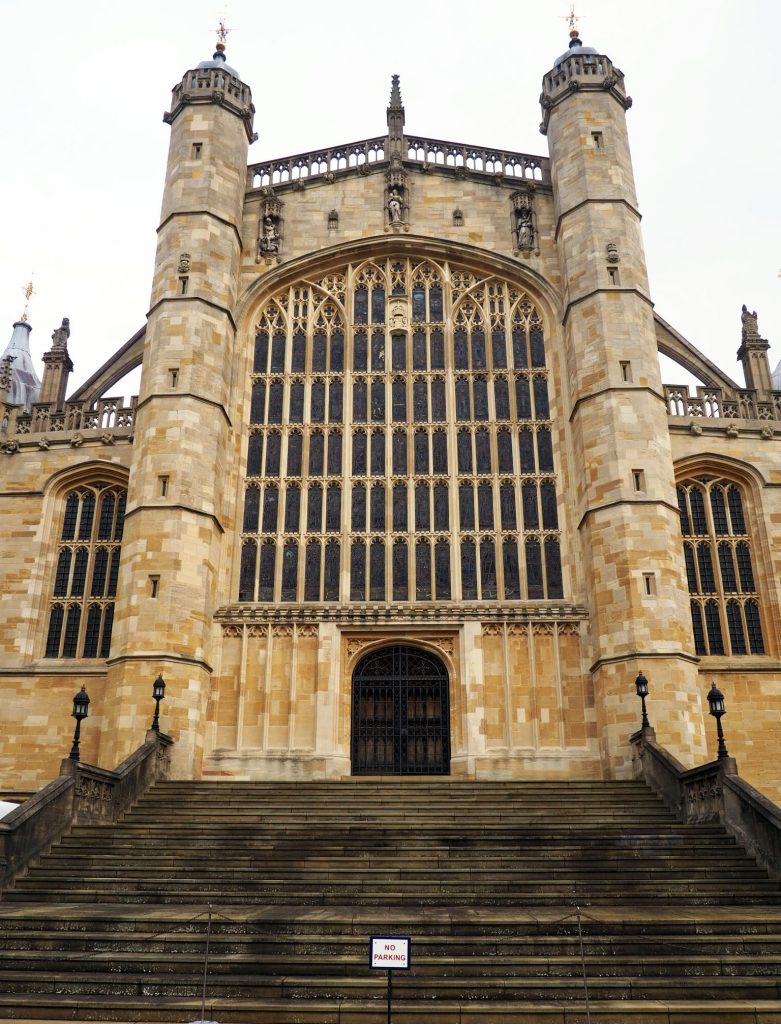 Order of the Garter

Here is the interesting part. St George’s Chapel is the spiritual home of the Order of the Garter. I was fascinated to learn more about it. King Edward III, who was inspired by the tales of King Arthur and the Knights of the Round Table, created the order. Today is stands as the oldest Order of Chivalry in Britain. Every Knight is required to display a banner of their arms within St George’s Chapel, with a helmet, crest, sword and enamelled stallplate. Upon a Knight’s Death, the stallplate remains as a memorial under the banner. It is a beautiful sight in the chapel. I was transfixed looking at all the banners. Today several members of the Royal Family are Knights, including The Queen who is Sovereign of the Garter. People who have held public office have also been Knights, including Sir John Major and Sir Winston Churchill. I bet you didn’t know that the Queen is a Knight!

Photos are not permitted inside the chapel. 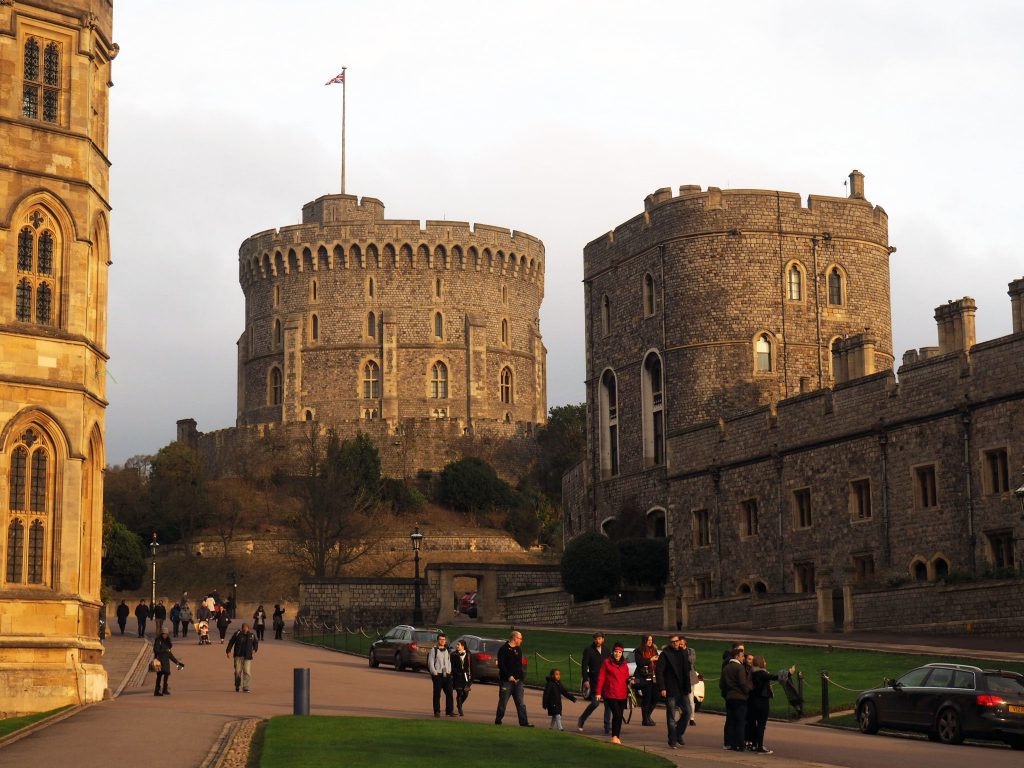 Before I left Windsor Castle I took beautiful photos of the Round Tower, when the sun actually brightened up the sky for a short while.

My trip to Winsor Castle ultimately succeeded in filling me with joy and imparting knowledge. Learning about the Order of the Garter was very interesting to me because I am writing a book that is heavily focused on knights and chivalry. Looking around Windsor is a worthwhile experience. One day I will go back and visit the State Apartments, which will surely put the cherry on top of the cake for Windsor Castle.

Seven Hours in Paris A weekend in Cambridge